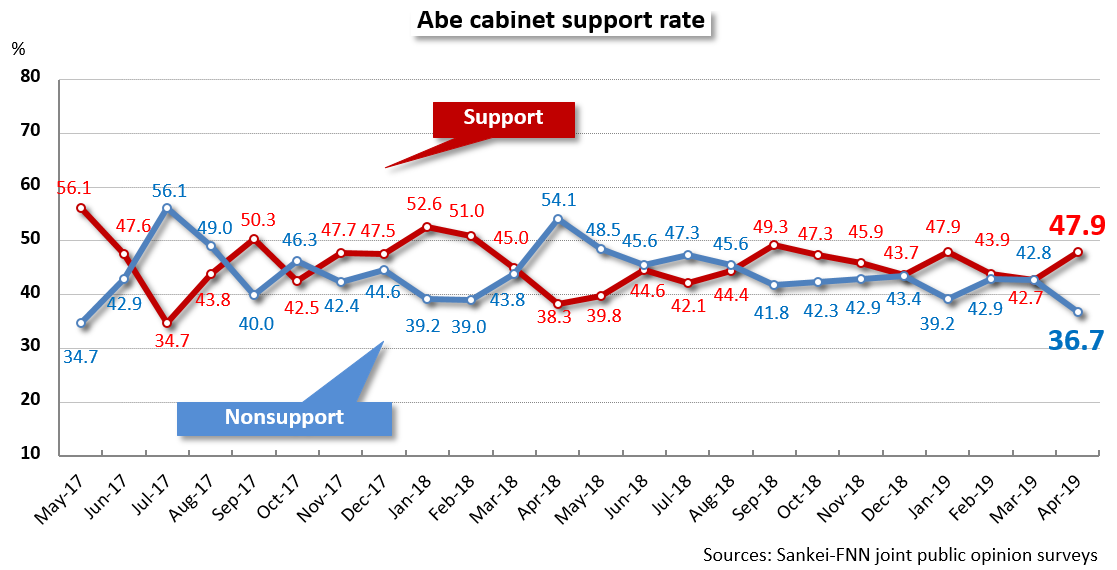 In the [nationwide] public opinion poll conducted jointly by the Sankei Shimbun and Fuji News Network (FNN) on April 6–7, respondents were asked for their views on “Reiwa,” the name the government decided on for the new era to follow Heisei. Those who thought Reiwa is a “good” name vastly outnumbered those who thought it is “not good,” 87.0% to 6.5%. The Abe cabinet support rate was 47.9%, up by 5.2 percentage points from the previous poll [conducted on March 16–17], and the nonsupport rate improved as well, decreasing 6.1 points to reach 36.7%. The widespread approval of the new era name is thought to have pushed up the cabinet support rate.

The name Reiwa was taken from the Manyoshu, Japan’s oldest collection of poems. A plurality of 75.8% said they “approve” of the era name being taken from a Japanese classic. Some 1.6% said that “it would have been better if the name had been taken from a Chinese classic.” Some 78.3% said they are “hopeful” that the new Reiwa era will be better than the Heisei era.

Those saying that the era name system “should be continued” vastly outnumbered those saying it “should be abolished,” 82.7% to 9.7%.

While it can be said that Prime Minister Shinzo Abe attracted more support with the decision on the new era name, there are some causes for concern, including the fact that the Liberal Democratic Party (LDP) suffered crushing defeats in both the Osaka gubernatorial and Osaka mayoral elections held on April 7 as part of the first round of nationwide local elections. For the recovery in the cabinet support rate to continue, it is urgent that the LDP rebuild its strength.

Asked who they think would be appropriate as the next prime minister, 25.9% of pollees said LDP Health, Labor and Welfare Division Director Shinjiro Koizumi, making him the most frequently cited person. Next was former LDP Secretary-General Shigeru Ishiba at 20.7%. Some 5.8% said Chief Cabinet Secretary Yoshihide Suga, who announced the new era name Reiwa.

[Polling methodology: The survey was conducted until the calculated number of responses was obtained by placing telephone calls on a random digit dialing (RDD) basis adjusted to the gender and age composition of each survey area. A total of 1,000 men and women, aged 18 and over, across the nation were surveyed. The survey was conducted on April 6–7, 2019.]