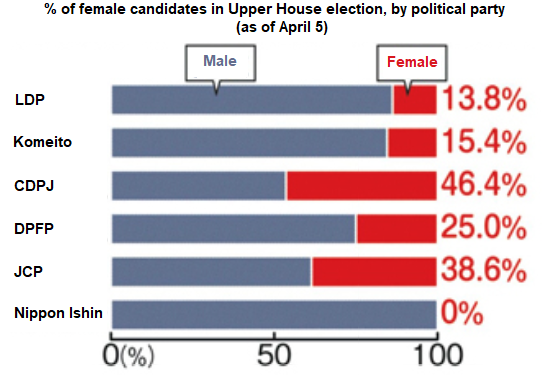 The Act on Promotion of Gender Equality in the Political Field was passed last May to ensure women’s views are better reflected in politics, but the legislation is already an empty formality. This law obligates political parties to make efforts “to field the same number of male and female candidates in elections as much as possible.” Not even one of the political parties will attain the goal in this summer’s Upper House election, the first national election since the passage of the legislation. Although the legislation was introduced by Diet members and was passed unanimously, no political party will comply with it.

According to party websites and other information as of April 5, six political parties have decided on 10 or more candidates who will run on their party ticket in the Upper House election. Of these parties, the Constitutional Democratic Party of Japan (CDPJ) is the party with the highest percentage of women candidates (46.4%). This is followed by the Japanese Communist Party (JCP) at 38.6%, the Democratic Party for the People (DPFP) at 25.0%, Komeito at 15.4%, and the Liberal Democratic Party (LDP) at 13.8%. Nippon Ishin has backed no women.

In the previous Upper House election held in 2016, the percentage of female candidates by party were as follows: LDP, 16.4%; Democratic Party (which has since split into the CDPJ, DPFP, and other parties), 20.0%; Komeito, 12.5%; JCP, 35.7%. The LDP is putting forward a lower percentage of female candidates than it did before the passage of the new law.

In the 41 prefectural assembly elections held on April 7, no political party reached the goal of fielding “an equal number of male and female candidates.” The percentage of female candidates by party were as follows: LDP, 4.2%; CDPJ, 26.0%; DPFP, 12.4%; Komeito, 8.4%; JCP, 45.7%. In other words, no party attained “gender equality.”

If the parties that set up the law do not comply with the spirit of the law, it will invite a collapse of ethics. The stances of the political parties are being questioned as the nation heads into the Upper House elections.