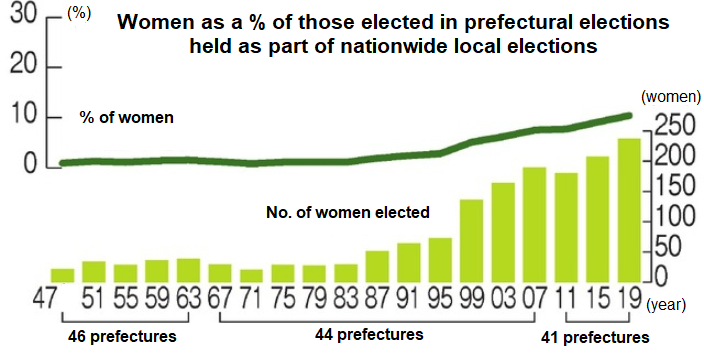 In the nationwide local elections held on April 7, a record-high 237 women won seats in 41 prefectural assemblies, accounting for 10.4% of the total seats up for grabs (2,277 seats) and breaking the 10% mark for the first time ever. This is a rise of a mere 1.3 percentage points from the 9.1% in the previous election despite expectations that the number of women elected would increase with the coming into force last year of the Act on Promotion of Gender Equality in the Political Field. Political parties need to get serious about developing and fielding women candidates if assemblies are to be divided evenly between the genders as society is.

In Yamanashi Prefecture, which had only one women assemblyperson prior to the election, six women ran for office, the highest number ever, but the incumbent was the only woman elected. Yamanashi is now the only prefecture in Japan with only one female assemblyperson. “Am I again the only women in this assembly of men?” asked a shocked Tomoko Kogoshi (JCP, age 55). “The major parties did not field enough women,” she lamented. “There are too few women in leadership positions in Yamanashi. Not enough women serve as elementary or junior high principals or as a top prefectural official.”

In the assembly elections in 17 ordinance-designated cities, 211 women were elected (20.8% of all persons elected), 34 more women than in the last elections. Women made up more than 30% of those elected in Sapporo City (32.4%), rising to 22 women from the 15 elected in the previous election. In Fukuoka City (total of 62 seats on the assembly), the number of women increased from 6 in the previous election to 11 (17.7%).

In Fukuoka City, 19 women ran for a seat on the city assembly, the largest number since 1987 when a record-breaking number ran. With the coming into force of the Act on Promotion of Gender Equality in the Political Field, a women’s group in the prefecture set up a politics school last year. Seven of the women enrolled at the school ran for election in the city assembly. Emi Naruse (49), one of the students who was elected, said, “I want to communicate to the assembly the views of women and consumers that have never been voiced.”