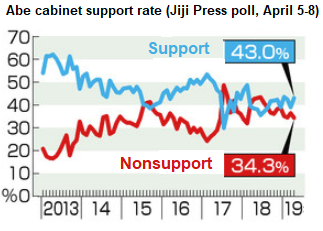 The survey, conducted for four days through Monday, showed that 84.8 pct of respondents gave positive responses to the new era name. It drew negative responses came from 10.4 pct.

Reiwa will replace the current Heisei as the country’s era name on May 1, when Crown Prince Naruhito accedes to the Imperial throne.

The poll showed that public support for Prime Minister Shinzo Abe’s cabinet rose 4.0 percentage points from the previous month to 43.0 pct, while the disapproval rate dropped 2.1 points to 34.3 pct.

The public’s positive responses to the new era name are believed to be behind the higher approval rate.

The survey did not reflect the impact of the recent resignations of two senior government officials over verbal gaffes. One of them, Yoshitaka Sakurada stepped down as Olympics minister earlier this week following remarks he made that appeared to make light of reconstruction from the March 2011 earthquake and tsunami.

Asked about reasons for supporting the Abe cabinet, with multiple answers allowed, 20.1 pct of respondents said there is no other suitable person for the prime minister’s post, 11.0 pct said he has leadership skills and 10.9 pct said they trust him.

The Constitutional Democratic Party of Japan received backing from 4.3 pct, unchanged from the previous month.

The support rate stood at 3.9 pct for Komeito, the LDP’s coalition partner, 1.9 pct for the Japanese Communist Party, 1.3 pct for Nippon Ishin no Kai (Japan Innovation Party) and 0.6 pct for the Democratic Party for the People.

The share of respondents who said they do not support any particular political party was 58.5 pct, down 2.2 points.

The interview-based poll covered 2,000 people aged 18 or over across Japan. Valid responses were received from 62.1 pct. ()