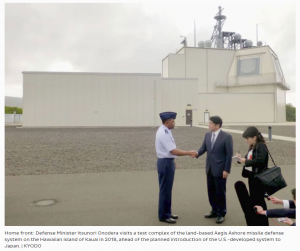 On March 21, a female student at the Akita University of Art in Araya Okawamachi, Akita Prefecture, was slated to give a valedictory speech at the college’s graduation ceremony.

According to the Asahi Shimbun on March 31, the unnamed woman wanted to talk partly about the proposed installation of an Aegis Ashore anti-missile system at the nearby Ground Self-Defense Force (GSDF) training area in Araya Okawamachi. Some locals are opposed to its installation because it is near a residential area.

In her original text, the student touched on the controversy without offering an opinion, saying it was a matter that “couldn’t be ignored.” However, she never got to say those particular words, because after she sent the draft to the head of student affairs, they asked the student if she didn’t mind removing the part about the anti-missile system, since it was a “politically delicate issue.”

Thinking her qualification to discuss the matter was insufficient, she decided to leave out any mention of Aegis. Later, the school denied it had pressured her to do so. The head of the university told the Asahi Shimbun that they would never censor anyone. They simply wanted the student to understand there was a wide range of viewpoints in the community.

This story illustrates how the media often addresses controversies in an indirect manner. The Aegis Ashore system has been contentious ever since it was proposed by the Defense Ministry and pushed on to two communities — one in Akita Prefecture, the other in Yamaguchi Prefecture — that don’t seem to want it. The government argues that North Korea and China have the ability to strike Japan, so an anti-missile system is needed. However, the discussion in the mainstream media hasn’t gone much further than reports on progress and the occasional pushback from locals.

Even when that pushback is covered, it tends to be balanced with uninterrogated reassurances from the authorities. On March 12, the Yamaguchi Shimbun reported on a Defense Ministry survey to measure the amount of electromagnetic radiation given off by the Aegis radar system planned for the GSDF training area in Mutsumi near the town of Abu in Yamaguchi Prefecture. An official from the Chugoku-Shikoku Defense Bureau told the newspaper they wanted to assure residents that the system would cause no health problems. Local opposition was not satisfied with the results of a previous, simulated survey, and the article went into detail about how the field survey would be conducted. Although the newspaper quoted one community leader as saying the survey had “no meaning” and didn’t answer the opposition’s questions, most of the article simply reported the survey results.

In contrast, a Tokyo Shimbun story on March 18 about the radiation surveys approached the matter from a public interest perspective, since it was written in the context of taxes and implied that the government has already decided to install the Aegis systems. As a result, the government’s main problem in realizing the project is convincing the media and local residents of its safety.

According to the March 18 report in the Tokyo Shimbun, the survey was presumably carried out to show that the government took residents’ concerns seriously. Local opposition was not mollified.

The financial aspect of the Aegis Ashore system was discussed in more detail on March 12 by veteran military journalist Shunji Taoka on J-Wave. After denuclearization talks between North Korea and the United States stalled in Hanoi, the government indicated that Aegis Ashore is more necessary than ever, but Taoka said that activity recently detected at a North Korean military site had nothing to do with ballistic missiles. It was about launching satellites, but the media haven’t challenged the government on this point.

Taoka dismisses the need for Aegis Ashore, as Japan already has Aegis capabilities on four destroyers in addition to four more on order. These are more effective than land-based deterrence because the ships are moving and thus difficult to attack. However, sea-based Aegis is more expensive than land-based and so the Defense Ministry can sell the Aegis Ashore system to the public by saying it’s cheaper, but that’s not necessarily true. In addition to the Aegis Ashore system, the government has to guarantee GSDF forces to protect the installation.

Moreover, the initial cost quoted by the U.S. government, which is selling the system to Japan, doesn’t include the missiles themselves, and what good is an anti-missile system without missiles?

The United States is developing new radar technology and Taoka thinks it wants Japan to pay for it. That much is suggested by the terminology used by both sides of the deal. To the U.S. Defense Department, the Aegis Ashore system comes under the heading of “foreign military sales.” In Japan, it’s classified as enjo, or “aid,” which is how you would qualify the anti-missile systems the U.S. supplied to South Korea and Romania for free.

Also, there still hasn’t been a clear explanation for why Akita and Yamaguchi were chosen as candidate locations for Aegis Ashore. Taoka argues these locations benefit the United States, since they are directly below the flight paths for missiles launched by North Korea that target Hawaii and Guam, respectively. If Japan wanted to defend Tokyo from incoming missiles, it would make more sense to install the system on the Noto Peninsula in Ishikawa Prefecture. Taoka doesn’t claim the United States demanded these locations, only that the government chose them in order to please its U.S. counterparts, which have demanded that Japan buy more defense systems.

Taoka is only one journalist, but he has covered defense issues closely for years from a practical standpoint. Like many government programs, sometimes defense spending is less about national security than about bureaucrats justifying their existence and satisfying vested interests and, until the media considers the Aegis Ashore controversy from that perspective, it will never tell the whole story.