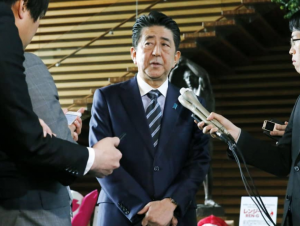 The Liberal Democratic Party’s defeat in two by-elections on Sunday is likely to prompt the administration of Prime Minister Shinzo Abe to use upcoming diplomatic events to deflect domestic attention from recent political setbacks, as he looks ahead to a key Upper House election in the summer, experts said Monday.

Sunday marked the first time the ruling LDP has been defeated in a by-election for national representatives since Abe returned to power in 2012, with the exception of one Kyoto race in 2016 where the ruling party lost by default.

The weekend’s losses added to a recent string of political headaches for Abe, including the gaffe-triggered resignations of two high-ranking officials including former Olympics minister Yoshitaka Sakurada, further strengthening the view that Abe faces an uphill battle as he heads toward the July poll.

“This is a very disappointing result. As we brace for the summer Upper House election each and every one of the LDP’s lawmakers must take this result seriously, and straighten themselves out so we can secure victories,” Abe told reporters at the Prime Minister’s Office on Monday.

Going forward, the Abe administration is likely to take full advantage of the positive political events on the horizon to distract voters from memories of its recent mishaps, in hopes of maximizing the odds of the LDP prevailing in the July election, experts have said.

“The most likely government strategy will be to maximize the benefits it can gain from the rising celebratory mood that will come with the (May 1) transition to a new era and the Group of Seven summit (in June) — not to mention (U.S. President Donald) Trump’s expected state visit to Japan” next month, said Norihiko Narita, a professor emeritus of political science at Surugadai University.

Political observers have noted that LDP losses in the recent by-elections bode ill for the Abe administration, regardless of efforts by party officials to minimize the fallout.

The by-elections in Okinawa and Osaka were largely seen as a bellwether to the LDP’s standing in the key July poll, which has significant implications for Abe’s longtime ambition to revise the post-war Constitution.

Soon after the results poured in, high-level officials in the LDP reportedly sought to downplay the severity of the losses by attributing them to the politically “unique” nature of Osaka and Okinawa constituencies — a not-so-veiled attempt to dissociate them from a national trend.

In Okinawa’s No. 3 constituency, opposition-backed freelance journalist Tomohiro Yara emerged victorious by riding a wave of local resistance to the government’s plan to relocate a U.S. military base. In the No. 12 district of Osaka, meanwhile, Fumitake Fujita of conservative opposition Nippon Ishin no Kai beat an LDP-backed candidate by successfully taking advantage of surging local support for the party’s push to reform the city’s administrative structure.

It is true those unique factors inherent to each region played a part in triggering the LDP’s twin losses, said Yu Uchiyama, a professor of political science at the University of Tokyo. But the results — coupled with the fact that key LDP-backed candidates were also defeated in Fukuoka and Shimane in gubernatorial elections earlier this month — suggests “the Abe administration’s grip on power in regional areas is now destabilizing,” Uchiyama noted.

“Just how much its support base is waning is open to further analysis,” he said.

Serving as a distraction during the final campaign phase for Sunday’s by-elections was Koichi Hagiuda, an Abe sidekick who sent a shock wave through Japan’s political epicenter of Nagatacho by abruptly floating the possibility that Abe may shelve, for the third time, a consumption tax hike slated for October depending on the strength of the economy. In order for the hike to be postponed, “a public mandate must be sought,” Hagiuda reportedly said on an internet broadcast last week, reigniting speculation that Abe, political gambler that he is, may go ahead with a “double election” by dissolving the Lower House to coincide with the pre-scheduled July poll.

Sunday’s election losses might make the Abe administration less confident about surviving an unpopular tax hike. But at the same time, experts are skeptical that Abe will really go ahead with postponing the measure, describing such a move as too risky.

“The government will likely continue to calibrate, until the very last minute, whether voters will simply welcome the shelving of the tax hike or consider it irresponsible … That’s a tough call,” Uchiyama said.

Narita, too, voiced skepticism, saying that many smaller retailers have already moved toward introducing the cashless payment systems needed for consumers to qualify for “reward point” refunds, effectively nullifying the effect of the tax hike — a measure encouraged by the government. Given their investment, backing off from the hike now has a high likelihood of backfiring, the professor said.

Meanwhile, the Osaka by-election has cast renewed attention on the idiosyncratic relationship between the Abe administration and opposition party Nippon Ishin no Kai.

It wasn’t until Saturday, a day before the election, that Abe joined the campaign trail in Osaka to deliver a speech supporting LDP-backed Shinpei Kitakawa, who eventually lost to Ishin-backed Fujita.

Experts say Abe’s apparently lukewarm backing of Kitakawa, as was shown by his eleventh-hour appearance in Osaka, points to his unwillingness to antagonize conservative Ishin, whose support he sees as essential to constitutional revision. “At a time when early voting is increasing, the prime minister making an appearance on the last day of campaigning isn’t as effective as before,” Narita said, noting that Abe’s actions suggest he may have sought to create merely the veneer of support for Kitakawa.