Perspectives: A partnership for advancing opportunity 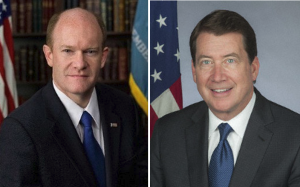 The following is a column submitted to the Mainichi Shimbun by the United States’ Ambassador to Japan Bill Hagerty and U.S. Senator Chris Coons, a Democratic member of the Senate Committee on Foreign Relations now visiting Japan, on the importance of bilateral cooperation for Indo-Pacific peace and security.

For seven decades, the United States and Japan have enjoyed a strong alliance and economic partnership built on a commitment to global peace and prosperity. As the world has changed, the partnership has grown and developed. Today, with our alliance stronger than ever, we are focusing our shared values and resources on the world’s emerging markets. This week the United States and Japan are holding bilateral meetings in Tokyo on energy and digital cooperation to meet development needs and support private sector investment. Economies have a great need for investment in modern infrastructure and an even greater need for leadership that will strengthen communities, create jobs, and promote lasting stability. This is especially true in the Indo-Pacific.

The United States and Japan are joining forces to meet this challenge. In 2017 we broadened our partnership by committing to collaborate on energy and infrastructure projects in emerging markets. During President Trump’s visit to Japan, the Japan Bank for International Cooperation (JBIC) and Nippon Export and Investment Insurance (NEXI) agreed to work together with the U.S. Overseas Private Investment Corporation (OPIC) to invest in developing economies.

Last year, the United States deepened our commitment to investing in developing economies through the passage of the BUILD Act. This landmark legislation paved the way for the creation of a modern U.S. development finance agency. The new U.S. Development Finance Corporation will have an investment cap of $60 billion and can partner with the development finance institutions of our allies, including JBIC.

The BUILD Act passed the American Congress with clear bipartisan support, a signal that U.S. leaders across the political spectrum understand the power of sound investments in emerging markets. Quite simply, investment on fair terms, which includes the private sector, pays real dividends. It creates jobs and opportunity, thriving communities, robust economies, and a more stable world.

The Indo-Pacific needs billions of dollars in new investment. The investment needs to be efficient, sustainable, and contribute to economic growth and social development. The United States and Japan do this kind of investment well.

In contrast, China’s One Belt One Road Initiative often provides opaque financial terms that leave countries deeper in debt, and other projects that were built without proper respect for national sovereignty, the environment, or the needs and concerns of local communities. We’ve also seen projects that were just not built to last. One Chinese-built bridge in Kenya collapsed shortly after it was inspected. A Chinese-built dam in Ecuador is also falling apart, with its machinery cracking and splintering, and its facility shorted out the national electricity grid.

More than 200 years ago, American President John Adams noted that there were two ways to subjugate a country: “Either the sword or debt.” His remark resonates today when several recipients of Chinese investment, including Pakistan, the Maldives, and Djibouti, are accumulating massive amounts of debt. Sri Lanka has even ceded control of a key port after being unable to make the necessary payments.

In strong contrast, the partnership between the United States and Japan enables us to channel more resources toward development that empowers people, strengthens economies, and protects the sovereignty of nations involved. We do not seek to subjugate. We seek to build stable foundations on which emerging markets can grow and thrive. Both the United States and Japan are committed to help elevate emerging countries to successful economies and create new trading partners.

Our approach to development is based on private sector investment. That is a key strength. The projects we support mobilize additional investment from private sector partners, bringing world-class engineering and construction standards as well as viable financial terms to these projects.

In the past, OPIC and JBIC provided $110 million in financing for construction of a natural gas power plant in Jordan, built by Virginia-based AES Corporation and Mitsui & Company of Japan. The plant has increased Jordan’s generating capacity by roughly 20 percent and won awards for its attention to worker safety.

We are eager to replicate this success elsewhere in the Indo-Pacific. One of the best ways we can build a more stable, peaceful world is to help emerging markets realize their full potential. America’s partnership with Japan advances shared interests and values with our emerging market partners. These partnerships have never been more important.