TOKYO — A joint academia-industry council deliberating recruiting by Japanese businesses put together a proposal on April 22 that would revamp current employment practices and diversify recruitment methods, supporting proactive recruitment of foreign students and those who have been overseas.

The aim is to secure diverse human resources and improve Japanese corporations’ international competitive edge. The move is likely to further nudge year-round recruitment being carried out mainly by IT companies and corporations in other fields.

The proposal emphasizes that in addition to the mass hiring of fresh college graduates that has traditionally been the most common form of recruitment, there should be an “orderly shift” toward a more diverse recruiting landscape that includes “job-based hiring,” in which employees are hired based on specialized knowledge regardless of whether or not they are new graduates. In order to secure more diversity in Japan’s workforce, moreover, the council advocates the proactive recruitment of foreign students, Japanese nationals who have experience studying overseas, and graduate students. 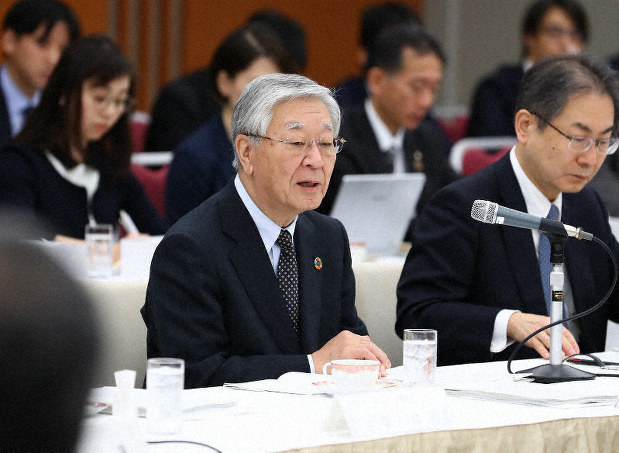 Keidanren chairman Hiroaki Nakanishi speaks at the second meeting of a joint academia-industry council on the future of recruitment and university education in Tokyo’s Chiyoda Ward on April 22, 2019. (Mainichi/Junichi Sasaki)

Following the April 22 council meeting, Keidanren (Japan Business Federation) chairman Hiroaki Nakanishi said, “Employers must send out the message that they want students who have experienced more than just common classroom study, such as studying overseas.” Meanwhile, chairman of the council, Saitama University President Hiroki Yamaguchi said, “We want to take thorough measures to prevent job hunting from becoming protracted or from being held too early, and thus forcing students to put their studies on the back burner.”

Year-round hiring can benefit companies because it enables them to secure personnel depending on how the companies are doing financially. It also makes it easier for those who have already graduated from college or those who have studied overseas and are therefore on an academic schedule different from Japanese universities to look for jobs. However, there are concerns that year-round hiring could prolong the hiring process and therefore increase the burden on small and mid-sized companies.

Last fall, Keidanren announced that it would be abolishing guidelines for recruitment that stipulated when companies could begin information sessions and interviews for potential recruits. In January of this year, the federation established a joint academia-industry council to debate education and recruitment from a mid- to long-term perspective. The latest recommendation is set to be reflected in deliberations by the government panel, Growth Strategy Council-Investing for the Future.

Going forward, the council will set up working groups that will deliberate measures to shift recruitment and hiring from current methods to more diverse ones without disruption or confusion. Furthermore, they will discuss measures for expanding internship programs and conditions for using student information obtained through internships in recruitment.

(JMH translated and added the below graphic which appeared in the Japanese version of this article published in the April 23, 2019, Mainichi Shimbun.)