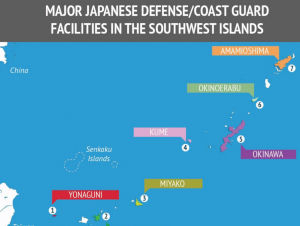 NIIGATA – First, Yonaguni. Then, Amami Oshima and Miyakojima. Next is Ishigaki.

Each of those southern islands have seen or will see expansion of Ground Self-Defense Force units and facilities. This expansion of the Self-Defense Forces’ presence across the “first island chain” is part of Japan’s “southwest island defense” design. The personnel there are positioning against a potential Senkaku Islands crisis and increasing transit of Chinese military aircraft and vessels through the area.

For Japan, self-reliance is particularly important with these bases because of the “gray zone” threat they represent. Of course, as with most things defense-related in Japan, domestic politics plays a notable role in the process, and negotiating acceptance of the new facilities without imposing too many operational constraints will be a challenging balancing act for the government.

The string of Japanese islands that stretch between Kyushu and Taiwan are part of the “first island chain” — the first line of land features extending beyond continental East Asia. For major continental powers like Russia and China, the first island chain represents a barrier to the broader Pacific. For the countries controlling the chain, it represents a security challenge, both in containment of continental military threats and preservation of one’s own sovereignty.

As an archipelagic nation, controlling traffic through Japan’s many waterways is challenging, to say the least. Legal measures put in place in 1977 restricted uninhibited foreign maritime traffic to only five of Japan’s many straits: Soya, Tsugaru, Tsushima East, Tsushima West and Osumi. In many ways, this was sufficient before continental powers were capable of projecting to the broader Pacific Ocean, but those circumstances have changed and, more than that, China has started actively challenging Japanese sovereignty in the East China Sea.

For Japan, the biggest trouble spots are the Tokara Strait, the Miyako Strait and the Senkaku Islands. While the Senkaku issue is common knowledge to most Japan observers now, the Tokara and Miyako straits only make the news when the Japanese government protests the passage of Chinese military aircraft or vessels through them.

The Miyako Strait is the body of water between Miyako Island and Okinawa Island, while the Tokara Strait is located between the islands of Amami Oshima and Yakushima. When trying to get access to the greater Pacific Ocean, the Chinese have a habit of sending their military aircraft and vessels through those corridors, despite Japan recognizing only one strait in that vicinity for international passage.

China has repeatedly dismissed Japanese protests while continuing to use the Miyako and Tokara corridors at will. This comes at a time when China has sought to change the status quo with regard to administration of the East China Sea, signaling a significant threat to sovereignty from the Japanese perspective.

However, from a legal standpoint, Japan is outnumbered in its interpretation. The country’s domestic law may prohibit free transit through those corridors, but it differs from the international definition of a strait, which is less than 24 nautical miles between sovereign lands. For context, the Miyako Strait is about 150 nautical miles wide between Miyako and Okinawa and about 50 nautical miles from Miyako to Ishigaki.

The Tokara Strait is about 112 nautical miles wide. Because of this, China can declare its right to traverse those corridors without fear of repercussion from the international community (including Japan’s ally, the United States), because they are not in clear violation of any international laws or conventions. For Japan, however, failure to challenge Chinese transit is akin to tacit acceptance of China’s increasingly aggressive administrative claims.

In response to these threats, the SDF has been upgrading and moving its pieces on the board. These moves have been several years in the making, with plans maturing within the Defense Ministry back in the early years of the current administration of Prime Minister Shinzo Abe. Since then, the Air Self-Defense Force moved an additional fighter squadron to its base in Naha, Okinawa Prefecture, and started construction of a second runway there to accommodate increased air operations. The GSDF added a Coastal Observation Unit to an existing facility on Yonaguni (Japan’s island closest to Taiwan) in 2016. It activated new units on Miyako and Amami Oshima in March and has plans to do the same for units on Okinawa’s main island and the island of Ishigaki.

Despite Japan’s recognition of the threat to sovereignty and clear plan for expansion of SDF presence across the southwest islands, its defense designs are still subject to domestic political factors. The negotiations with local communities for the new facilities took years, and while things went relatively smoothly at Yonaguni and Amami Oshima after gaining local acceptance, they have not been as easy at other places in Okinawa Prefecture.

Miyako has already been subject to protest. Local residents recently challenged improper ammunition storage for GSDF units there, demonstrating issue attention and a willingness to protest. It remains to be seen what the government may have promised in the negotiations running up to the activation of the new unit on Miyako compared with what the GSDF really needs to execute its mission. If there is a disparity between those two things, one can expect continued friction despite the strategic impetus for stationing forces there.

Meanwhile, the new facility on Ishigaki remains in limbo altogether owing to local politics. The mayor of Ishigaki supports the basing plan, but the assembly voted down a motion to accept it. Complicating the Ishigaki issue is the pressure from the broader anti-base movement in Okinawa related to U.S. military facilities. There is no alternate plan to the Ishigaki proposal, so the national government is in damage control mode to gain local acceptance while still trying to manage the other “burden reduction” issues, such as construction of the expanded U.S. Marine Corps facility off the Henoko area of Nago.

From now, the critical things to watch will be Okinawan politics and China’s reaction to the new bases. Whatever the strategic necessity of the southwest islands buildup may be, the Japanese government still has the requirement to manage domestic politics. Whether it is able to do so without imposing so many constraints on the new units that it impacts operational effectiveness has yet to be seen.

Meanwhile, China has been quiet on the rhetoric so far, but it will be important to see how much Beijing tests the waters (both literally and figuratively) with state-directed activity near the Senkakus and through the Tokara and Miyako straits.