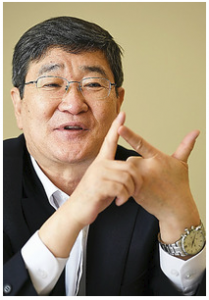 Ko Young-hwan, a former North Korean diplomat who served as an interpreter for Kim Il Sung, recently sat down for an interview with The Asahi Shimbun. The former vice president of South Korea’s Institute for National Security Strategy talked about the situation in North Korea and what kind of diplomacy the country will conduct toward Japan, the U.S., and South Korea following the U.S.-DPRK summit in late February.

Question: Workers’ Party of Korea Chairman Kim Jong Un on April 12 indicated that he would wait until the end of this year for the U.S. to change its attitude.

Ko Young-hwan: I think there are two reasons for that. Kim may have figured that U.S. President Donald Trump will focus on the election next year and will not have much time to deal with North Korea. Also, Kim ordered relevant departments last year to stockpile food and oil in anticipation of worsening relations with Washington. It is believed that the North currently has stockpiles for 8 to 12 months. It may be thinking that this will be enough to endure the sanctions. Oil and food prices don’t change substantially.

Q:  Did North Korea use foreign currency for the stockpiles?

Ko: Yes, it did. The North engaged in ship-to-ship transfers of goods to evade sanctions and stockpile oil. But this forced the country to use more foreign currency than necessary. North Korean companies are trading directly with Chinese companies in international waters. But North Korean ships are making complicated moves by heading to different places after leaving North Korea before heading to the meeting points for business deals to avoid being pursued by the U.S. and South Korea. The prices of goods obtained through these transfers are from 50% to more than 100% higher than regular market prices because danger pay is added and extra work is required.

Ko: The country is trying to save money. I’ve heard that senior officials of the Workers’ Party of Korea are going to Rakwon Department Store and Taesong Department Store in Pyongyang less frequently than before. The stores have been refurbished and were expected to serve as places for people to use foreign currency. At Taedonggang Seafood Restaurant in Pyongyang, where South Korean President Moon Jae-in went in September last year, many party officials used to spend spent $100 (approx. 11,000 yen) per visit. But I’ve heard more people have been spending only $10-20 for light meals and drinks since the end of last year. I’ve also heard that the use of foreign currency has declined sharply in the city’s famous Okryu-gwan cold-noodle restaurant and Changgwangwon Health Complex, a luxurious recreation and bathing facility.

Q: There are moves to condemn illegal hoarding of foreign currency.

Ko: The anti-corruption campaign the regime has been running since last autumn is a measure to distract the public from its dissatisfaction about the economic sanctions. Last autumn, senior officials of the Supreme Guard Command were reportedly purged over the refurbishment of the Paekhwawon State Guest House, for which the organization is responsible, after they were found to have hidden a huge amount of foreign currency.

Q: The amount of foreign currency has been reduced in North Korea, but the exchange rate for the U.S. dollar remains at 8,100 won.

Ko: Authorities are monitoring citizens’ foreign exchange transactions. Citizens who bought dollars at a higher rate than usual will be immediately reported to the State Security Department and punished.

Q: About how much does Kim Jong Un have in state funds?

Ko: It is believed that Chairman Kim Jong Il left $4 billion (approx. 440 billion yen). Kim Jong Un has spent foreign currency for various reasons, such as solidifying his regime and avoiding the impact of sanctions. There is also a speculation that he has less than $1 billion left. A UN Security Council resolution calls for all North Korean workers abroad to return home by December. That will further worsen economic conditions.

Ko: There was a rumor in Pyongyang in early April that a new economic policy would be announced at the Supreme People’s Assembly (Diet). The public might have expected that as long as the sanctions were not eased, the size and the degree of freedom of the market would be expanded and that the privatization of assets would be allowed. But the conclusion was self-rehabilitation, which has been repeated since the time of Kim Il Sung. I heard citizens were disappointed and said, “Has there been a time when we lived without self-rehabilitation?”

Q: What is your outlook for U.S.-DPRK relations?

Ko: President Trump might have realized after the two summit meetings that Kim Jong Un has no intention of denuclearizing. The President also believes that the North’s repeated requests for sanctions relief prove that the sanctions are working. Rather than rushing to negotiate, I think the President will try to maintain the status quo while only deterring the North’s military provocations.

Kim Jong Un has been taking a positive attitude toward dialogue since he met with a group of South Korean special envoys in Pyongyang in March last year. If he launches military provocations on the grounds of failed dialogue, that will go against his own policy. American nuclear-powered aircraft carriers might be dispatched again and the tension might rise. North Korea may take a wait-and-see attitude for a while and try to pressure the U.S. to negotiate by continuing to produce nuclear-related material.

Q: Seoul’s mediation between Washington and Pyongyang doesn’t seem to be working well.

Ko: During the U.S.-ROK summit on April 11, South Korea expected to get the green light to reopen the Kaesong industrial park and resume Mount Kumgang tourism in order to hold a summit with the North by around June. If that had happened, North and South Korea would have been able to hold a summit by the end of the year. But Trump rejected all of South Korea’s proposals. Instead, he disclosed that  “South Korea bought a large amount of weapons.” This might have made Kim Jong Un very distrustful of South Korea. A working-level meeting between the South and the North might be possible, but a summit will not take place for a while.

Ko: These were countermeasures against Trump’s remark that South Korea purchased weapons. It can be said that North Korea launched a relatively low-level backlash against the U.S. because it hasn’t accepted the North’s request for dialogue.

Q: Won’t North Korea reach out to China and Russia?

Ko: China doesn’t want North Korea to collapse. It may consider selling rice to the North and importing zinc and molybdenum. But it’s unlikely that China will provide North Korea with large-scale economic support because it has to deal with the trade dispute with the U.S. Also, Kim Jong Un will reportedly meet with Russian President Putin this month. But I don’t think Russia can take the place of China.

Q: What will become of the Japan-DPRK relationship?

Ko: The North Korean leadership believes that Japan will pay “compensation for its colonial rule” if progress is made in the nuclear issue and sanctions are eased. In the 1990s, the leadership expected it could be $10 billion (Approx. 1.1 trillion yen), but now they reportedly expect it to be $20 billion . But the leadership just listens without responding to Japan no matter what it says because the U.S.-DPRK relations are in stalemate and there is no prospect of sanctions relief.

Workers’ Party of Korea signed a three-party joint declaration for the normalization of diplomatic relations when Japan’s Liberal Democratic Party and the Social Democratic Party visited North Korea in 1990. But it didn’t go well. Kim Il Sung said, “We have to improve our relationship with the U.S.” North Korea’s state-run media continue to criticize Japan possibly because North Korea wants to ensure that the situation is advantageous to it in preparation for future negotiations with Japan.

Q: The Japanese government didn’t take part in the joint submission of a resolution condemning North Korea to the UN Human Rights Council in March.

Ko: North Korea will never give credit to Japan for not submitting a resolution. North Korea is sensitive about the word “human rights.” Kim Jong Un’s direct orders lead to human rights violations in North Korea and he is responsible for them. Criticizing the North’s violation of human rights is equal to criticizing Kim Jong Un. But Japan has approved resolutions which have made North Korea very unhappy. The North may be thinking that Japan should make efforts to convince the U.S. to ease sanctions instead.

Q: Tokyo will host the Olympic and Paralympic Games next summer. Will that provide an opportunity for negotiations with North Korea as last year’s Winter Olympic Games in PyeongChang did?

Ko: The U.S.-DPRK talks that began after the PyeongChang Olympics have not produced any results. North Korea may not be pinning high hopes on the Tokyo Olympics. But keeping the door open is meaningful as a diplomatic measure. Kim Jong Un visited Panmunjom and held a summit with the his South Korean counterpart last April. That was made possible after his sister Kim Yo Jong visited South Korea for the PyeongChang Olympics and reported, “We can hold dialogue with South Korea.”