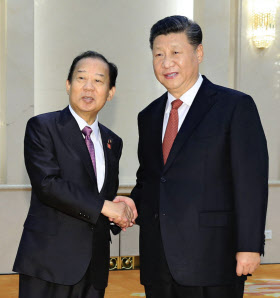 All national dailies reported that LDP Secretary General Nikai met with Chinese President Xi in Beijing yesterday as Prime Minister Abe’s special envoy, highlighting the Chinese leader’s remark that he plans to visit Osaka for the G20 summit in late June. The dailies added that President Xi did not respond firmly to Nikai’s request for the Chinese government to ease restrictions on Japanese food imports that were enforced following the Fukushima nuclear accident.

Yomiuri wrote that as a pro-China politician, Nikai is expected to lay the groundwork for President Xi’s visit to Osaka in preparation for inviting him to Japan again in the autumn or later as a state guest. While noting that the Trump administration is concerned about the sustainability and lack of transparency of China’s Belt and Road initiative, Sankei reported that Nikai told the press after the meeting: “Japan will cooperate closely with China in helping to promote the initiative. We will not try to gauge America’s reaction to our dealing with bilateral issues with China.” Mainichi wrote that Tokyo needs to coordinate closely with Washington in offering cooperation to China’s Belt and Road initiative since the U.S. views it as an attempt to challenge the existing international order.