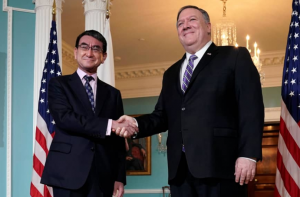 Foreign Minister Taro Kono is greeted by U.S. Secretary of State Mike Pompeo at the State Department in Washington on April 19 prior to holding bilateral security talks. | REUTERS

As a former Japan-U.S. alliance manager, I observed last Friday’s events with interest. After all, the SCC is the highest-level institution for alliance management, offering the two governments a forum to set priorities, to identify areas needing action, and to make declarative statements regarding commitments and expectations under the alliance treaty. The joint statement that is published from the SCC is a tool for strategic messaging, an instrument for evolving alliance expectations, and a road map for lower level officials on where to cooperate in the realms of foreign policy and defense. In other words, it gives an indication of where the two governments are steering the alliance for the next few years.

Last week’s SCC meeting and joint statement put the allies on the right track, though not without a few noticeable speed bumps. It offered continuation of ongoing defense initiatives, increased clarity in areas not traditionally covered in SCC statements, and provided an effective “fact sheet” of alliance policies and activities. While there were many topics covered, there were five takeaways especially worth noting — three transformative for the alliance and two that portend friction for the security partners.

The first takeaway and a high point for the SCC relates to the cyber domain. In particular, the joint statement declared that a cyberattack could trigger security obligations under the alliance treaty. That is a transformative step, not just for the Japan-U.S. alliance, but other U.S. alliances as well since it is the first such guarantee the United States has made in any of its bilateral alliances.

More work is necessary, however. The security guarantee in the event of a cyberattack is significant but will not mean much without further clarification between the alliance partners.

There is no international legal definition of an “armed attack” in cyberspace, meaning there are unanswered questions that could impede operationalization of this security guarantee. What scale and type of cyberattack could trigger the threshold for collective self-defense? What level of attribution to another country is necessary before the alliance can respond? While the SCC noted these decisions would be made in close coordination, groundwork is necessary to ensure the allies can manage expectations and effectively respond to cyberattacks in a timely, seamless fashion.

The second transformative takeaway from the SCC was the declaration of a shared vision for a “Free and Open Indo-Pacific.” This may not seem significant since both the U.S. and Japan have traditionally held similar policies for the region, but the “Free and Open Indo-Pacific Strategy” is Tokyo’s brainchild, and until last Friday, the U.S. government had not acknowledged its adoption of the term.

For example, the 2017 SCC statement kept the two partners’ approaches to the region separate, noting “the United States’ continued commitment to maintain a strong presence in the region and Japan’s initiatives demonstrated by its ‘Free and Open Indo-Pacific Strategy.’” For the first time — perhaps ever — the SCC joint statement has adopted a broad regional strategy for the alliance that was the product of the Japanese government.

Third, the SCC offered its strongest statement yet on the alliance’s commitment to fostering multilateralism. While past SCC joint statements have welcomed multilateral cooperation and named specific partners like South Korea, this statement was the first to reflect the allies’ mutual desire for a “networked structure of alliances and partnerships,” naming the ASEAN nations, Australia, France, India, South Korea and the United Kingdom, among others.

Many observers have questioned whether Japan’s push to strengthen security relationships with other countries is “hedging” amid perceptions of waning U.S. commitment, but this SCC statement suggests that it is not really hedging if the U.S. is actively supporting it. Both the U.S. and Japanese governments understand that their alliance alone cannot achieve a free and open Indo-Pacific while also managing the security challenges in Northeast Asia; thus, fostering multilateralism is an essential aim for the alliance moving forward, and this sentiment was captured in the most recent SCC statement.

The fourth takeaway and a future point of friction relates to the section in the “fact sheet” regarding aviation safety. This is not related to the Self-Defense Force’s recent F-35 mishap or other SDF accidents that have occurred in recent years; rather, its inclusion is specific to U.S. military aviation incidents in Japan.

In February, Kono asserted that the Japanese government was seeking a revision to the U.S.-Japan Status of Forces Agreement based on a series of U.S. aviation mishaps in the country.

The goal of the revision is to afford Japanese officials expanded authority vis-a-vis incidents and accidents involving U.S. forces in Japan. From the U.S. perspective, the SCC’s call for prompt exchanges of information and continuation of “regular bilateral dialogue regarding aviation safety” was meant to mollify the Japanese government and avoid further discussions of a SOFA revision. However, from the Japanese perspective, the joint statement will provide grounds to pursue at least a supplemental agreement under SOFA. Unfortunately for the allies, this issue will likely prove a point of contention sooner than later.

Finally, the SCC fact sheet ended with a statement on alliance cooperation in support of the 2020 Olympics. While there are important bilateral initiatives ongoing related to the Tokyo Olympics, there is one specific reason the Japanese government wanted this language included in the SCC joint statement: civil-military dual use of Yokota Air Base.

The Japanese government at both the national and prefectural levels has long sought the use of the U.S. air base in Tokyo for commercial flights. With the Olympics, the Japanese government has the chance to kill two birds with one stone: It can increase commercial capacity for Olympics patrons while setting a precedent for future dual-use designs for the airfield in Yokota. The U.S. government will be wary about allowing such precedent-setting actions, but the SCC statement puts the two sides on a collision course at the negotiating table.

All in all, the SCC provided a great foundation for the alliance moving into the next decade. While this article highlights some points of friction, there remains more than enough good to see the partners continue the evolution of the Japan-U.S. allianc

e into one postured to meet the challenges of an increasingly complex security environment.