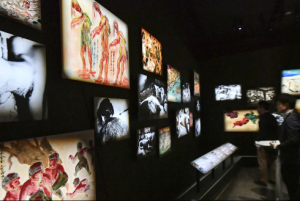 The renovated Hiroshima Peace Memorial Museum is unveiled to the media in the western Japan city on April 24, 2019 a day before its official reopening. (Kyodo)

New displays of photos and personal belongings left by atomic-bomb victims were unveiled Wednesday at the Hiroshima Peace Memorial Museum.

The museum’s main building, where the new items are exhibited under the theme of “Reality of the Atomic Bombing,” was shown to the media a day before its reopening after two years of renovation.

A section on foreign victims who were in the western Japan city at the time, including American prisoners of war, was added to the renovated building, which focuses on the lives of some victims by displaying photos, drawings and personal belongings, rather than explanation by text.

Displayed with spotlights at another dimly lit section is a life-size picture of a girl standing in the middle of burned-out ruins, together with scorched student uniforms and monochrome photos of victims with their skin severely burned.

The number of all displayed items remains almost unchanged from before, but that of photos increased to 173 from 112.

“I want visitors to recognize how horrible Hiroshima was on Aug. 6 (1945, when the world’s first atomic bomb was dropped by the United States) through actual materials, and look at the grief of each victim and his or her family,” Takuo Takigawa, head of the museum, told reporters.

The museum, which attracted around 1.52 million visitors in the year through March, will also continue to display paper cranes made by then U.S. President Barack Obama, who visited Hiroshima in 2016.

It is the third large-scale renewal of the museum which opened in 1955.