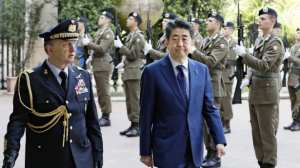 ROME — Japanese Prime Minister Shinzo Abe called for deeper cooperation in the economy and defense in a Wednesday summit with Italian counterpart Giuseppe Conte, eager to keep the country from leaning too far in favor of China.

“We will further strengthen Japan-Italy ties across a range of fields, including national security, defense, culture, trade and investment,” Abe said at a joint news conference following their meeting. He last visited Italy two years ago, before Conte took office.

As the host of the Group of 20 summit in June, Japan wants to stay on the same page with the U.S. and Europe when it comes to China. But Italy has recently been moving closer to Beijing, signing a memorandum of understanding to cooperate with China’s Belt and Road infrastructure project.

Japan is especially concerned by Europe’s interest in Chinese 5G technology. Equipment made by Huawei Technologies and other Chinese companies are in over half of Europe’s mobile bases. Despite the U.S.’s call for a blanket ban, the European Union has allowed its members to make their own decisions on whether to ban Huawei products from their networks, and Italy, for one, appears keen to work with Huawei.

Japan has followed the U.S. lead in casting a skeptical eye toward Chinese equipment increasing the risk of data leaks. As an alternative to China’s state-led approach, Abe at the G-20 will propose a new framework for data sharing that puts emphasis on transparency and ensures that privacy is protected when data is transmitted. He asked Conte for his support on Wednesday.

The two leaders discussed details for potential security partnerships, such as the joint development of defense equipment, in light of the bilateral arms transfer agreement that went into effect on April 4. Conte expressed his support for Abe’s “Free and Open Indo-Pacific Strategy” at the news conference.

China’s Belt and Road initiative was a key topic as well. Japan plans to cooperate with China to develop infrastructure in third countries as part of its push to boost bilateral ties. But it has set four conditions, such as maintaining the host countries’ financial health and ensuring transparency of the projects.

Conte and Abe “agreed on the importance high-quality infrastructure has on the economy and national finances,” the Italian premier said.

Italy is the only Group of Seven nation to sign a memorandum of understanding to join Belt and Road. A Chinese state-owned company is investing in the port of Trieste, which some worry Beijing could use as a military foothold. Chinese military vessels have begun making stops at the Greek port of Piraeus after it was bought by a Chinese company.

Many European countries making overtures to China face fiscal and economic problems. Italy is one, while Poland, the Czech Republic, Slovakia and Hungary have also signed a memorandums on Belt and Road. Abe will meet leaders from the bloc on Thursday.

But some European nations are growing wary of China’s influence in the region. The EU in March proposed a 10-item action plan on China in response to its growing economic and political influence. It expressed concerns over China’s growing role in 5G and other key infrastructure, and pushed to reduce negative influences on the EU market. France and other members have also criticized Italy for joining Belt and Road.