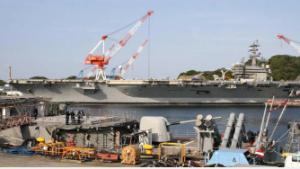 The end of March this year marked the third anniversary of the effectuation of the security legislation that allows Japan the limited exercise of the right of collective defense. Amid the growing defense cooperation between Japan and the U.S., the USS Ronald Reagan, a nuclear-powered aircraft carrier homeported at the U.S. Navy Yokosuka base (Kanagawa Prefecture), was opened to Japanese media outlets on April 23.

Climb the steep narrow stairway inside the aircraft carrier and the flight deck, nearly 300 meters long, heaves into view. Beyond the flight deck, where there sat various machinery used for maintenance, loomed the Maritime Self-Defense Force destroyer “Izumo.”

“The U.S. Navy and Japan as host nation share the port,” said U.S. Navy Yokosuka base commander Jeffrey Kim. “There is no example of this in any other country,” said the captain, emphasizing the close partnership between Japan and the U.S.

In November 2017 the Ronald Reagan, carrying 70 aircraft, and two other U.S. flattops conducted exercises off the Korean Peninsula in order to put pressure on North Korea, which had repeatedly conducted provocative nuclear tests and missile launches.

The Ronald Reagan and other ships belong to Carrier Strike Group 5. Rear Admiral Karl Thomas, commander of the strike group, invited a group of journalists to the “tactical intelligence room,” where he explained that the U.S. Navy conducts with the MSDF such joint training as anti-aircraft and anti-submarine warfare. “The Japan-U.S. alliance is the cornerstone of stability in the region,” he said.

“I am very interested in” China’s second [sic] aircraft carrier currently under construction,” said Admiral Thomas. But he expressed confidence that the  Ronald Reagan, with its long service history, is superior in performance to Chinese aircraft carriers.

In order to counter threats posed by China and North Korea, the U.S. Navy has deployed new Aegis destroyers capable of ballistic missile defense to Yokosuka. It also deployed the USS “Wasp,” a multipurpose amphibious assault ship that carries state-of-the-art F-35B fighters, to the Sasebo base (Nagasaki Prefecture).

“We need to continue showing the U.S. military presence” for the stability of the region including Japan.” Admiral Thomas expressed his strong resolution.