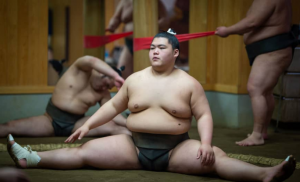 Sumo has no free agency.

Once a man enters a stable there is no system in place to allow transfers to a different one.

Of course wrestlers do sometimes move, but only when their original heya (stable) closes down or the oyakata (sumo elder) who recruited them branches out to set up his own establishment.

In either case the rikishi himself has little-to-no say in where he ends up.

When Magaki Beya closed in 2013, the original plan was for its occupants to move to Miyagino Beya.

Wakamisho (currently Terunofuji) was looking forward to daily training sessions with Hakuho, but negotiations behind the scenes soured, and all remaining Magaki Beya personnel instead ended up with a different yokozuna (Harumafuji) in Isegahama Beya.

As all rikishi are employees of the Japan Sumo Association, rather than the individual stables, there is no possibility of a Bosman ruling in the future either.

The counterbalance to that is that any wrestler is free to choose any heya when initially joining the sport.

Stables will give a shot to anyone willing to try sumo, and rarely turn away applicants.

For those without Japanese nationality, of course, that doesn’t apply. With just one foreigner slot per stable, those coming from abroad generally have to take any place they get.

What if stables were free to choose, though?

If sumo had an American-style draft, who would end up where?

The NFL draft, which takes place this week, has grown to the point where it has almost become a sport in and of itself.

Dozens of mock drafts are released by major media outlets, and the months leading up to the event swirl with rumor and intrigue.

So as the 2019 Spring Regional Tour winds down, and stables rebuild their practice rings ahead of next week’s banzuke (rankings) release, let’s imagine the JSA has instituted the first ever sumo draft and that all currently active rikishi are eligible to be picked.

What would the order be?

With sumo not being a team sport, no one is drafting for need and every pick falls under the cliched “best player available.”

That makes the stable choosing irrelevant and leaves us free to focus on the picks themselves.

So without further ado here is my 2019 Sumo Mock Draft.

Yes, he may be in the closing stages of his career, and there is no guarantee that he will be around two years from now, but Hakuho is still the only rikishi on the banzuke that is a virtual lock to be in title contention every single tournament. The yokozuna has lifted the Emperor’s Cup five times in the past two years. In other words, he has accumulated as much silverware in his phase of injury-decimated decline as rival yokozuna Kakuryu has in his entire career.

Even if he hangs it up after the Olympics, Hakuho is a good bet to win more tournaments between now and then than the current banzuke’s ozeki will win by their respective retirements, combined. If 41-year-old Tom Brady was available this week, would you bet against him going number one overall?

A shock pick at second? Perhaps. It’s certainly a projection, but the bloodline is there. Naya’s father (Takatoriki) was a sekiwake who lifted the Emperor’s Cup once, and his grandfather (Taiho) was a yokozuna who did the same 32 times.

Still just 19 years old, Naya’s 6-1 record in March will put him around No. 22 makushita for May. Given his size and the way his sumo continues to improve, he could very well be in the top division before he turns 20. He’s a pick with high bust potential, but also one that might seem obvious in hindsight three years from now.

Takakeisho’s ceiling is probably his current rank, with two or three more titles. Physical limitations and a lack of diversity in his sumo means he is unlikely to reach yokozuna, but his mastery of the techniques that he does use, as well as his exceptional heart and fighting spirit, have already taken him further than any thought possible. The Russell Wilson of sumo.

Diminutive and explosive, his results put him in position to win, but probably only if others slip up.

Takayasu gets the nod here based on his age and the fact that he has been so close for so long. Four times in the past two years he has gotten 12 wins — a score that has been good enough to lift the title on just four occasions since the 29-year-old joined sumo. Just one more win and the probability of being crowned champion explodes. Four of 2018’s six tournaments were won with a 13-2 record. With Hakuho and Kakuryu soon to be out of the way, Takayasu should be able to take the final step before long.

Kakuryu has come back from a worse position before, so this pick is based more on past performance than future hope. Written off at the start of 2018, many were expecting a retirement announcement, but instead he won two straight titles. Kakuryu will be 34 this summer, so the window is definitely closing, but with Hakuho dealing with injuries and no obvious successor to the throne in the top division, it’d be no surprise to see the veteran grab a couple more championships before retiring.

The eye-roll pick. If you want to accuse me of recentism, that’s fine. I understand. Ichinojo has been a disappointment for most of his top-division career.

The thing is that when he is hot, he is really hot, and I’ll take a flyer on the 26 year old being in the zone at least a few more times over the next five to seven years. Anyone who can go 14-1 in makuuchi has the ability to win a title. If Tamawashi, Mitakeumi, Tochinoshin and Takakeisho can lift the Emperor’s Cup, why not Ichinojo?

Onosho would have been a top-three pick not so long ago, but he hasn’t been same since blowing out his knee. At just 22, time is on his side, but if regaining his old explosiveness isn’t possible then Onosho will need to come up with a plan B to realize his potential.

Ryuko has been slowly but surely climbing the banzuke. While his record doesn’t immediately jump out at you, what I’ve seen in training leads me to believe he has the X-factor needed to succeed. He boasts strong tsuparri (thrusting), improving belt skills,and an aggressiveness that should serve him well when facing bigger and stronger opponents.

Call me crazy, but I still believe Goeido has one more title in him. No facts to back that up — purely a gut feeling.

Asanoyama isn’t a blue-chip talent but he is solid and has shown improvement each step of the way. Still just 25, he is a good bet to be mid-to-upper makuuchi for the next five to six years.