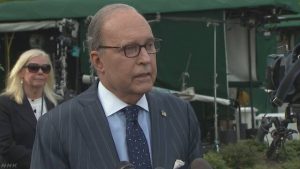 NHK reported online that concerning the U.S.-Japan trade talks that were launched last week in Washington, Director of the National Economic Council Kudlow told reporters on Wednesday that discussions are being conducted at full speed. Kudlow reportedly added that the United States is strongly hoping to conclude a trade agreement with Japan and that Prime Minister Abe has been very cooperative. The network interpreted this remark as an expression of expectation that progress will be made in the negotiations on opening up Japan’s agriculture market. Concerning auto trade, Kudlow reportedly said that Japanese firms have invested a great deal in the U.S. auto industry. NHK interpreted this remark as welcoming Japanese companies’ moves to increase their production in America.