Wanting to marry for love, many Japanese end up single

An NHK special on April 13 looked into the issue of the increasing number of unmarried Japanese, saying that the sharp decline in the marriage rate is apparently responsible for 90% of Japan’s sagging birthrate. Government statistics show that the ratio of unmarried people increased dramatically in the 25-29, 30-34, and 35-40 age brackets for both men and women from 1960 to 2015. The Cabinet Office’s “2018 Declining Birthrate White Paper” provided the following data on the ratio of unmarried people in these three brackets: 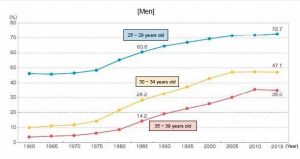 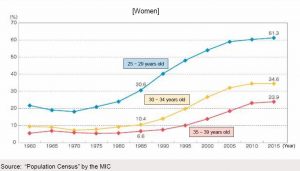 The NHK program also cited statistics showing that the ratio of people who had never married by age 50 and for statistical purposes were never expected to wed had risen from 5.6% in 1990 to 23.4% in 2015 for men and from 4.3% to 14.1% for women during the same period. 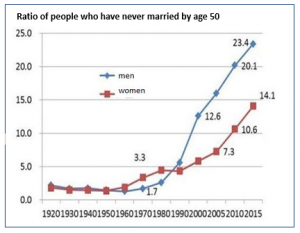 The high ratio of unmarried people is apparently not due to a lack of interest in marriage, according to the National Institute of Population and Social Security Research’s statistics cited in an article in Yomiuri’s Aug. 5, 2018, edition. IPSS statistics show that 85.7% of single men and 89.3% of single women aged 18-34 said they wanted to get married. Rather people are not marrying because they can’t find suitable partners. The NHK program cited data showing there was an increase of around 50% from 1987 to 2015 of men and women who said they could not find anyone to date.

Certain social changes have also been cited as probable reasons for the growing number of people who don’t get married. For example, while it used to be expected that everyone would marry and that remaining single was socially undesirable, the choice to remain single is more accepted as a result of the diversification of lifestyles. An IPSS survey found that while in 1987 only 4.5% of men said they never plan to marry, this figure increased to 12% in 2015. There was also an increase from 4.6% to 8% for women during the same period.

Kazuhisa Arakawa, author of the book Cho-Solo Shakai  (Super Single Society) explained on a Fuji TV program on New Year’s Day 2019 that basically only 30% of men and women are capable of dating and actively finding their own life partners. However, in the past, there were social mechanisms for matchmaking that helped the remaining 70% find partners and that is why until the 1980s practically all Japanese got married. The ratio of people who never married rose sharply by the 1990s after “love marriages” became more common than “arranged marriages” and matchmaking became unfashionable. In short, the passive 70% are now required to fend for themselves and many of them are unable to do so.

“Koimemo,” a website devoted to issues related to romance and marriage, cited four reasons for the rise in the ratio of unmarried people in a report on April 13, 2019: women’s increasing participation in the workforce, an increase in the number of people who choose to remain single, the increasing popularity of cohabitation, and young people’s low incomes. The report noted that all these factors make people hesitant to take the plunge. Women in particular need to think about the impact of marriage and childbearing on their careers, and a live-in boyfriend might be an option that gives them more freedom. Since young people’s incomes are low, women have good reason to wonder why they should marry if it would mean they would have to do more housework in addition to earning a living. Women see little merit in marrying because Japanese workstyles and inadequate social support systems for childcare often result in their bearing the brunt of childcare plus housework on top of their jobs. The report concluded that perhaps the problem has more to do with a society that “makes marriage impossible” than with the men and women themselves.