At college entrance ceremonies men in black, and women too

In early April the Nippon Budokan Hall in central Tokyo is rented out almost every day to local colleges for ceremonies welcoming new students.  Almost all of the young men and women who file into the hall are clad in black or navy blue suits. Their somber attire is in sharp contrast to the pink and white blossoms adorning the sky just outside the facility, which sits adjacent to the Chidorigafuchi moat, a popular spot for viewing cherry blossoms. According to two Asahi (4/12) reporters who covered Meiji University’s entrance ceremony at the Budokan on April 7, only two women broke satorial rank with the thousands of other students in black. Asked why she dressed in black, one woman said, “I didn’t want to make a scene.”  Said another female student: “It would’ve been fun to wear something different, like a beige suit, but I’m not brave enough to do that.”

According to Konan University Professor Daisuke Tano, black became the color du jour in the early aughts. The sociologist explained that as college graduates then were having a tough time finding jobs after the economic bubble burst, most chose to wear dark suits for job interviews to appear conservative and conformist. “The practice prompted freshmen to select black attire for the entrance ceremonies based on the thinking they could also wear it for job hunting in their senior year,” said the professor. His analysis was corroborated in the field, with by a Meiji University freshman telling an Asahi reporter that he bought a black suit to wear to the entrance ceremony, coming-of-age ceremony, and for job interviews in the future. 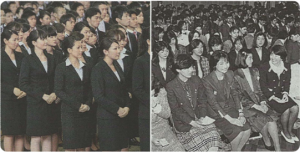 Some educators and analysts are reportedly alarmed by a trend toward cookie-cutter conformity. Senior Fellow Makito Yurita of the National Institute for School Teachers and Staff Development points out that black suits also appear to be de rigueu for new corporate employees on their first day on the job. He recently posted on his Twitter account photos of initiation ceremonies for new hires at JAL in 1986 and 2011. The image from three decades ago shows newly hired female employees wearing a variety of outfits while in the more recent one they were all wearing black suits. The researcher speculated that today’s youths probably prefer being “one of many” to “one and only” because they assume that deviation from the norm will be met with resistance. “They presume that being unique or standing out from the crowd could potentially be a disadvantage when they are evaluated by their supervisors. They want to be invisible and stay within their ‘comfort zones’ by being the same as everyone else instead of being different and running the risk of triggering a backlash from their peers and others.” 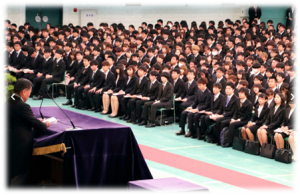 This year, International Christian University (ICU) in Tokyo urged its freshmen to wear  “clothes of original design and color” to express their personalities at the entrance ceremony.  ICU Professor Etsuko Kato, who is responsible for student affairs, takes issue with the prevalent mindset among students that they should “abandon” or “hide” their personal traits in job hunting. In an essay that was published in Asahi (4/4), the scholar said she was stunned to find that despite the advisory, probably 99% of new students wore black suits to the entrance ceremony for a university that “cherishes internationalism and diversity.” She insists that by wearing black suits, the students chose to “stop thinking,” underscoring that their tendency to follow prevalent norms without question must end, because restrictions on attire, be they self-imposed or not, could lead to restrictions on freedom of speech and ideas, as seen in wartime Japan. “Japanese college students must be unique and independent thinkers,” she said. “They have a right to wear or not to wear a black suit.”