The USS Ronald Reagan aircraft carrier is about as long as Tokyo Tower is high.

The U.S. Navy in Japan opened the USS Ronald Reagan, a nuclear-powered aircraft carrier, to media outlets at its homeport of Yokosuka on April 23. The Ronald Reagan is the heart of Carrier Strike Group 5. Referring to the fact that China is building a third aircraft carrier, Karl Thomas, commander of the strike group, told a group of journalists, “We are interested in the third aircraft carrier and closely monitoring this development.” The commander stressed that defense cooperation with Japan is the “cornerstone of regional stability.” 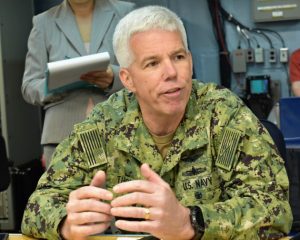 The aircraft carrier is capable of carrying 75 aircraft including helicopters. The flattop, along with the Aegis destroyer Shiloh and other ships, makes up the carrier strike group. Referring to operations of the strike group, which was formed on the basis of the accumulated experience of the U.S. Navy, the commander said: “[Smooth operations] are not easy and require technology, the ability to coordinate, and training. I am interested` in seeing how quickly China can develop its capabilities.”

Regarding freedom of navigation operations implemented by the U.S. military and others in the South China Sea, the commander stressed that “our purpose is for all countries to be able to freely navigate in and fly over waters under the protection of international law.” 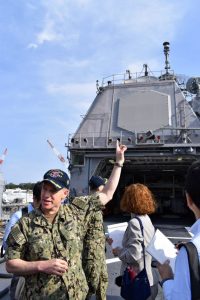 Explaining the functions of the guided-missile cruiser USS Shiloh

U.S. Forces Japan Deputy Commander Christopher Mahoney sat down with media outlets for an interview at the Yokota base on April 22. He presented the view that the emergence of China is causing a significant change in the security environment. “Twenty-eight years ago, we did not even discuss the possibility of China’s having an aircraft carrier, but now we are discussing how many flattops China could possess.” The deputy commander also cited as examples China’s development of intermediate range ballistic missiles and fighters.

The USS Ronald Reagan belongs to the U.S. Seventh Fleet, deploying from Hawaii to Australia to the Indian Ocean. The aircraft carrier has been under repair since late last year. The U.S. Navy headquarters in Japan also opened part of the ship repair facility on the Yokosuka base. There are 15 plants, which correspond to repair facilities in the U.S., capable of all kinds of ordinary repairs. These facilities play an important role in the U.S. Navy’s deployment to the Indo-Pacific region from the regional base at Yokosuka.