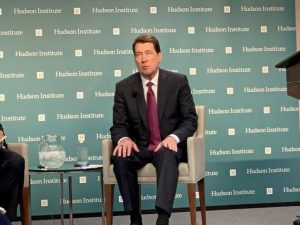 Nikkei filed an online story saying that Ambassador Hagerty reportedly said during an event he participated in Washington on Thursday that it is necessary to settle trade issues between the United States and Japan at an early date. The paper wrote that citing the effectuation of the TPP-11 in December 2018, the Ambassador reportedly said that American farmers and businesses are at a disadvantage because Japan’s tariffs on U.S. imports are different from those on other nations’ imports. Concerning a trade agreement with Japan, the Ambassador was quoted as reportedly saying that America should be given conditions as favorable as those of Japan’s other trade partners. The paper also quoted the Ambassador as reportedly saying that the Japanese market is not open for American products as the U.S. market is open to Japanese imports and that an agreement at the trade talks would benefit both nations and strengthen their strategic relations. Jiji filed a similar report.

Sankei also filed an online report saying that Ambassador Hagerty told reporters on Thursday in Washington that the issue of the DPRK’s abductions of Japanese nationals would be taken up for discussion at the U.S.-Japan summit on April 26. The paper quoted the Ambassador as reportedly saying that the abductions are an important issue for President Trump, pointing out that the President has supported the Japanese people on the issue by bringing it up at his two summits with DPRK leader Kim Jong Un. The paper also wrote that concerning the recent Russia-DPRK summit in Vladivostok, the Ambassador reportedly said that Kim Jong Un’s outreach to Russia was part of his effort to seek relief from international sanctions and that the Kim-Putin summit underscores that the sanctions are working.