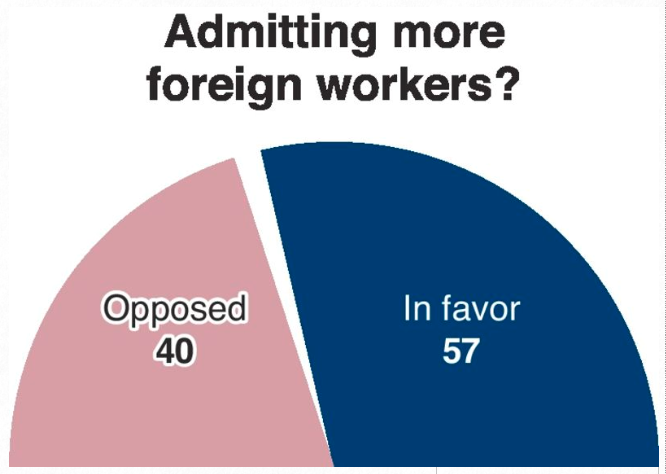 A majority of people who responded to a nationwide survey by The Yomiuri Shimbun are in favor of admitting more foreign workers.


The mail-in survey showed 57 percent of respondents were in favor, while 40 percent were opposed.


In contrast, 59 percent of respondents said they were reluctant to receiving nursing care from foreigners and 53 percent expressed a reluctance to living near foreigners. These results indicate that while the public seems to understand the need to admit more foreign workers, many are not at ease with having contact with foreigners around them.

As of October, there were 1.46 million foreign workers in Japan, according to the Health, Labor and Welfare Ministry. Of them, 652,000 were students and technical interns mostly involved in labor requiring simple skills. A new government program that launched in April to admit more foreign workers is expected to let in a maximum of 345,150 foreigners over the next five years.


In the survey, 71 percent of respondents said they thought it is either “good” or “generally good” that there are more foreigners living in Japan, indicating positive views among a broad majority.

When asked what industries foreign workers would be helpful in, the largest number said agriculture, forestry and fisheries (53 percent), followed by construction (44), manufacturing (41) and nursing care (35). Multiple responses were allowed.

Although many people hope foreign labor would be helpful in the nursing care industry, many respondents expressed reluctance to actually receiving care from foreigners. By age group, 60 percent of respondents in their 60s and 67 percent in their 70s and older expressed such reluctance, indicating higher levels among age groups that are more likely to be receiving nursing care.


When asked about the benefits of admitting more foreign workers, the highest proportion, at 68 percent, said it would “resolve worker shortages and stimulate the economy.” As for the negative aspects, 63 percent said “lifestyle differences would lead to more problems in communities” and 57 percent said “law and order would deteriorate.” Multiple responses were allowed to both questions.


When asked about immigration in the future with the assumption that foreigners will settle in Japan, 51 percent of respondents said they were in favor while 42 percent were opposed. Anti-immigration political parties and politicians have garnered support in the United States and Europe. When asked whether something similar would occur in Japan if more immigrants were admitted, 76 percent said yes.


The survey was conducted from March 12 to April 18 on 3,000 eligible voters nationwide. Responses were obtained from 2,103 people, a response rate of 70 percent. (JMH translated the bar graph on the front page of the May 5 Yomiuri Shimbun and added it.)