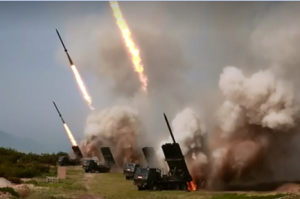 All Sunday papers reported that North Korea fired several short-range projectiles on Saturday, each traveling 70 to 200 km northeast before landing in the Sea of Japan. Security analysts reportedly suspect that the projectiles were fired from a multiple launch rocket system. According to the dailies, the provocation was apparently intended to warn the U.S. and tighten discipline within the DPRK Army amid stalled bilateral denuclearization talks. The papers conjectured that Chairman Kim is trying to test the U.S. leader’s patience, speculating that the North might gradually step up its provocations to gauge what it will take to trigger a strong reaction from the U.S. However, outlets wrote that the launch of short-range missiles does not violate UN Security Council resolutions, surmising that the Kim regime is not willing to break off dialogue with the Trump administration at least for the time being.

Secretary of State Pompeo held a teleconference with Foreign Minister Kono on Saturday to discuss the situation, during which they reportedly agreed on close bilateral cooperation as well as trilateral cooperation with South Korea. The GOJ reportedly reacted calmly to the launches based on the assessment that they will not have any immediate effect on national security. Defense Minister Iwaya reportedly told the press on Saturday while in Hanoi that his ministry will maintain vigilance against potential future provocations by the North.

In follow-up reports on Monday, all papers spotlighted an announcement made on Sunday by the DPRK state media regarding the launches. The papers highlighted the view held by some defense experts that judging from the images of the projectiles released by the media outlet, they may have been short-range ballistic missiles similar to Russia’s Iskander mobile short-range ballistic missile, which would constitute a violation of the UN resolutions.

Meanwhile, Monday’s Yomiuri took up remarks made on a Sunday talk show by Secretary Pompeo, who said the launches “didn’t present a threat to the United States or its allies,” or derail the Trump administration’s attempts to reach a denuclearization deal with North Korea.

In a related story, Kyodo reported on Saturday that Special Representative for North Korea Biegun will visit Japan on May 7-8 to discuss bilateral efforts to achieve the final and fully-verified denuclearization of North Korea.