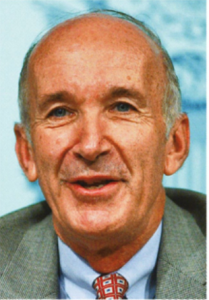 As an American, I am very proud of my country. I am happy that I was born a citizen of the United States, a federal republic. I am, however, sometimes disappointed by American people who speak ill of their country or president, arguing that the president should be a Republican or Democrat.

I have never wished I’d been born a citizen of another country. But I respect other countries. I have long said that I love Japan next to the U.S.

In the parliamentary democracy adopted by Japan and the UK, people elect lawmakers and decisions are made by a majority of lawmakers. In a republican form of government with democracy, people elect a president who guarantees rights of minority groups according to law. I personally prefer the latter to the former.

However, in the U.S. there is no such figure as the Emperor in Japan or the Queen in the UK who symbolizes the state and whom a majority of the people are proud of and respect.

I studied Japanese politics under Dr. Edwin Reischauer at Harvard University. Dr. Reischauer served as the U.S. ambassador to Japan in the early 1960s. After returning to the U.S., he taught at the university. Professor Reischauer taught students that the Meiji Constitution gave the Emperor the greatest power including the supreme command of the Imperial Army and Navy, but the Emperor rarely exercised his authority as supreme commander until 1945 when Japan finally decided to surrender.

In 1946, the Constitution of Japan, which was drafted by the U.S., was promulgated. Many Japanese might have been surprised that the new supreme law called the Emperor the symbol of the State, professor Reischauer told his students, but it clarified the role of the Emperor more than ever before.

In the early 1970s, I had the honor of participating in the opening ceremony of a Diet session. Then-House of Representatives Speaker Naka Funada in formal attire climbed to the platform and gave a ceremonial address at the opening ceremony. This was followed by the honor of being spoken to by the Emperor. The solemn ceremony deeply impressed me. The Emperor Showa delivered a short message, bowed, and left the chamber. This concluded the ceremony.

One hour or so after the opening ceremony, then-Prime Minister Kakuei Tanaka, who had changed from formal attire to a business suit, as had other lawmakers, delivered his policy speech on the administration’s objectives for the new Diet session.

The opening ceremony was held in the morning at the Chamber of the House of Councillors where lawmakers of the two Houses gathered. It was enveloped in silence save for the Emperor Showa’s voice. Unlike the ceremony, during the prime minister’s speech the opposition bench shouted critical comments and the ruling party members countered with applause and cries of approval on the House floor.

The prime minister’s speech reminded me a little of the State of the Union Address. It was strong proof that democracy functions well in Japan. I was somewhat envious of Japan. Japanese people express solemn and dignified respect to the Emperor who represents the State of Japan. There is no equivalent figure in the U.S. to whom such deference is shown.

Some Americans may wonder why General Douglas MacArthur was one of those who strongly requested the Emperor Showa remain on the throne in 1945. I think General MacArthur made a pragmatic and wise decision.