TOKYO — With Japan’s revised immigration rules having taken effect on April 1, moves to accept more foreign workers are picking up steam as the country struggles to cope with a serious labor crunch. Not surprisingly, there are snags.

Restaurants and other industries dealing with acute labor shortages have welcomed the legal change, but the governing Liberal Democratic Party is already hearing pleas to expand the scope of the law. The LDP is to come up with concrete proposals before the government adopts a new economic growth strategy and compiles its fiscal 2020 budget.

In a related effort, the LDP is discussing measures to deal with Japan’s rising tide of overseas visitors. The Research Commission for the Establishment of a Tourism-Oriented Nation convened on April 9, with one member complaining that Japan is in a state of “over-tourism.”

Some of the foreign workers coming to Japan will be expected to help accommodate all those travelers. The lodging industry held a certification exam on Apr. 14, with 391 job hunters from overseas sitting for the test, versus around 760 applicants. Some who “earnestly” wanted to take the exam were probably unable to do so, said Shunsuke Takei, a member of the LDP commission.

The revised immigration law has created new visas that allow foreign laborers to work for up to five years in food service, lodging and 12 other industries, provided they pass occupational skills tests and Japanese language proficiency exams.

Companies in the 14 industries are preparing to take on more foreign workers. Some 200 representatives from various industries gathered for a briefing held by the Ministry of Justice in the central Japanese city of Nagoya in February.

Chief Cabinet Secretary Yoshihide Suga took the lead in coming up with the new immigration rules. Now the ruling party is doing the follow-up work.

Industries not covered under the rules are calling for the system to be expanded. Stressing that convenience stores need foreign workers, the Japan Franchise Association is negotiating with the Ministry of Economy, Trade and Industry to be included. 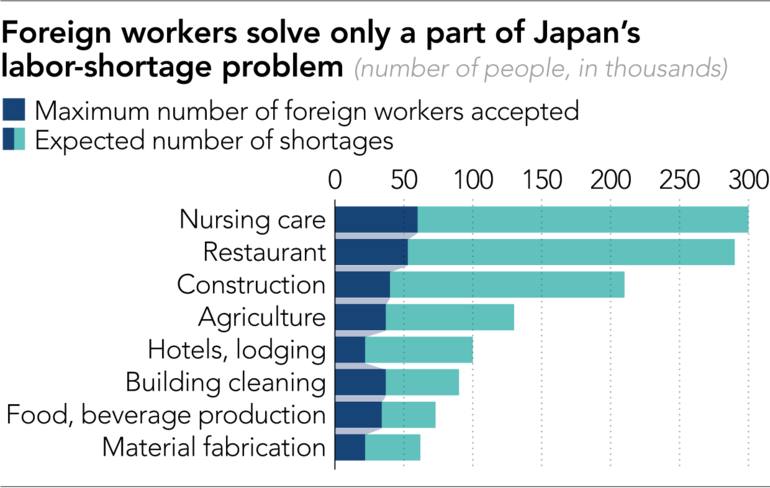 The new rules will do little to resolve the labor shortage, even in the industries that are allowed to hire foreign help. While the government expects allow in around340,000 foreign workers over the next five years, the 14 sectors covered are expected to face a shortfall of 1.45 million workers. The nursing-care industry, with the largest allotment of foreign worker slots, at 60,000, is calling for smooth implementation and expansion of the system.

“We cannot survive without relying on foreigners because the workload on staff members at care facilities has become unbearable,” said Tatsushi Koizumi, deputy chief of the Japanese Council of Senior Citizens Welfare Service.

The trade group, which represents nursing homes, is supporting Mitsuyoshi Kakuta, an LDP candidate in this summer’s upper house parliamentary election. Kakuta is taking policy suggestions from the council’s leadership as he readies his campaign.

At a meeting in February in the city of Kesennuma, in northeastern Japan, former Defense Minister Itsunori Onodera met with seafood processors worried that many of their foreign staff would move to big cities once the new rules took effect. “Foreign workers will be attracted by big cities because wages are higher there,” said Shinichiro Takaoka, head of the Japan Foodservice Association.

Reflecting rural concerns about an exodus of foreign labor, Yoshio Kimura, who chairs the LDP lawmakers group dealing with the foreign worker issue, said, “It’s important to prevent the concentration (of foreign workers) in big cities.” As the LDP turns its attention to rural constituents ahead of the upper house election, there may be more calls to expand the scope of the new immigration rules.

But there are numerous challenges ahead before Japan can take in more overseas workers. One is to improve working conditions. The government is scrambling to make life more pleasant for blue-collar foreign workers, fearing Japan could lose out in the global competition for labor. The LDP’s judicial affairs division was briefed on April 10 about “comprehensive measures” the government is working on to deal with issues related to the change in the immigration law.

At a meeting held on April 10 at LDP headquarters, members ofthe division also discussed the findings of a Justice Ministry survey of foreign trainees working under the Technical Intern Training Program who fled their workplaces.

The trainee program, which predates the April reforms to the immigration system, functioned as a back door Japanese companies looking to hire unskilled foreign labor despite Japan’s previous prohibition on the hiring of such workers.

The survey of 5,218 foreign trainees who left their workplaces found that 414 of them were working under conditions that may have violated laws and regulations concerning pay. The violations included employers paying workers less than the minimum wage or failing to pay extra for overtime work on holidays or during late-night hours.

A separate survey by the Japan Institute for Labor Policy and Training found that the average hourly wage for workers in the trainee program for less than three years was 762 yen ($6.80). Over 80% of those surveyed were paid the minimum wage.

The government is grappling with problems linked to its flawed foreign labor policy. The Justice Ministry is brandishing the stick to bring employers into compliance with the rules of the trainee program, threatening to temporarily bar employers from participating if they are found responsible when a trainee disappears.

Employers are also being urged to improve their training programs for foreign employees. The Japan Business Federation, or Keidanren, the country’s most powerful business lobby, wants companies to help their foreign staff to learn Japanese. A trainee from Nepal works in a factory in East Osaka. (Photo by Ken Kobayashi)

A nonpartisan group of lawmakers, led by LDP lower house member Takeo Kawamura, has drafted a bill to provide subsidies to companies and local governments offering language training for foreign workers. The bill was approved on April 9 by a ruling-party policy council, prompting Fumio Kishida, the LDP’s policy chief, to call for “efforts to enact the bill.”

Ten Allied has Vietnamese full-time employees who assist the part-timers. They serve as interpreters and translators, helping shop managers communicate with Vietnamese staff over the phone, for example.

Japan has a long way to go if it wants to integrate foreign nationals into its workforce in a serious way. They make up only 1.6% of the nation’s workforce, compared with 10.3% in the U.K. and 2.0% in South Korea.

Even if the government hits its target of accommodating 340,000 overseas workers within five years, that will not represent a dramatic surge in the expected growth of the foreign labor force, according to Yutaka Okada, a senior economist at Mizuho Research Institute.

To attract workers from other parts of Asia, where living standards are rising fast, Japan must quickly burnish the tarnished reputation of the current trainee program. Another obstacle is the large group of conservative lawmakers within the LDP who are skeptical about expanding the pool of foreign labor.

Seiichi Eto, an LDP upper house member and an aide to Prime Minister Shinzo Abe, is among the skeptics. Although he has not spoken out against the change to the immigration law, Eto said it is “undesirable to increase casually the number of foreign workers allowed in without taking any measures” to deal with potential problems.

If the steps aimed at helping foreign workers find employment and adjust to life in Japan are halfhearted and ineffective, the legal change could create a backlash among lawmakers worried about the possibility of a decline in public safety when the economy hits a rough patch.