SEOUL — Mokpo, a sleepy port city in southwestern South Jeolla Province, has found itself at the center of a national debate in South Korea over history and identity. Reports emerged in January that Sohn Hye-won, a politician from the ruling Democratic Party of Korea, made a “bulk purchase” of Japanese-style houses in the city.

There is disagreement over what to do with such buildings. Japan annexed the Korean Peninsula in 1910, ruling it as a colony until 1945. South Korea recently marked the 100th anniversary of the founding in Shanghai of the Korean Provisional Government, the country’s government in exile, but the significance of Japanese architecture from that era and the question of what to do with it remain unresolved.

It is a sensitive issue at a time when relations between South Korea and Japan have once again grown chilly. South Korean courts have ordered Japanese companies to pay compensation to people who toiled in their factories during the war, but Tokyo says these claims were settled when the two countries normalized relations in 1965. Later, the South Korean National Assembly speaker said that the Japanese Emperor should apologize, then compared Japan to a “brazen thief” after Tokyo demanded that he apologize for the remarks.

Japanese assets that fell into local hands after World War II are called “enemy property” in South Korea. Some people want to conserve these assets, saying they memorialize the country’s painful history. Others describe them as the remnants of Japanese imperialism and want them destroyed.

Mokpo prospered as a shipping port for rice, cotton and salt during Japanese rule. The city’s historic districts still retain the character of that time. The city received a special designation from South Korea’s Cultural Heritage Administration for its cultural and historical significance in August 2018.

Sohn is suspected of having her relatives and acquaintances buy the Japanese houses with the expectation that their value would rise due to the designation. She denies the allegation, and says the purchase was “to preserve the landscape.”

Property prices around the Japanese houses have doubled since the scandal erupted, according to a local real estate agent. It has also served as a publicity campaign for Mokpo. People are flocking to the city for a firsthand look.

“The number of tourists visiting here during the weekend has doubled, or tripled,” said Park Sung, a researcher at the Mokpo Culture Center. The last time the city saw this much attention was when former President Kim Dae-jung, who was from the area, entered politics in the 1960s, Park added. 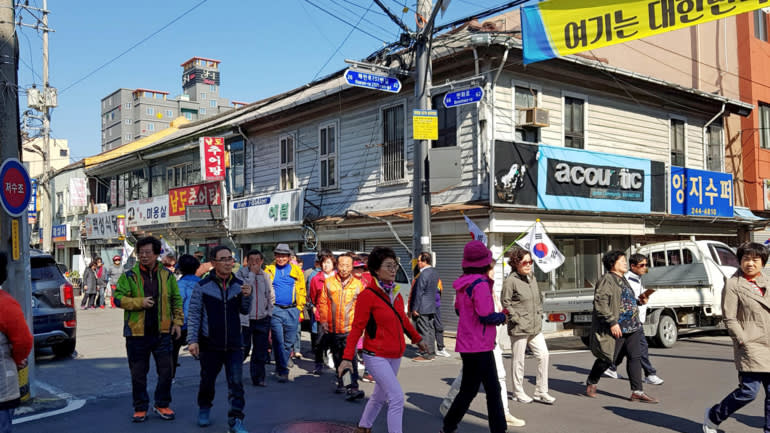 Suspicions of speculation in Japanese houses have drawn tourist to the southwestern city of Mokpo. (Photo by Sotaro Suzuki)

The flood of visitors is partly by design. Mokpo’s designation is part of a program designed to preserve areas with modern cultural assets, rather than individual buildings. Cities can then use those areas as a resource for urban development.

In addition to Mokpo, the heritage authority designated Japanese houses in Gunsan and Yeongju as significant last year. It plans to name five more locations this year. There is an irony in using the vestiges of Japan’s colonial rule as tourist attractions, but regional cities, many of which have been battered economically, are often eager for the additional cash.

“If Mokpo is to generate revenue, tourism is the only way,” said the Mokpo Culture Center’s Park. “I’m waiting for the day when relations between South Korea and Japan improve, and a lot of Japanese tourists come here.”

The fates of prewar Japanese buildings have varied. The building that housed the government during Japanese rule was demolished in 1995 under President Kim Young-sam, but other prewar buildings still stand. Among them are the Old Seoul Station building, formerly called Gyeongseong Station, and the former Seoul City Hall.

President Moon Jae-in’s administration has opposed preserving colonial-era buildings, and he has advocated the “liquidation of pro-Japanese remnants.” The administration pushed that slogan during the 100th anniversary of the formation of the Korean government-in-exile and the The March 1 Movement, a protest against against Japanese rule that also took place in 1919.

Messages objecting to the preservation of prewar Japanese houses have been posted on the public petition board of the South Korean Presidential Office website.

“Halt the restoration of ‘enemy property’ houses by pro-Japanese people,” one reads. “Cancel the designation of Japanese houses as cultural assets,” says another.

On the 100th anniversary of the March 1 Movement, the Gyeongsangnam-do Office of Education removed a large juniper tree from its front yard, describing it as a “symbol of colonial rule.” It was replaced with a pine tree indigenous to South Korea.

The office said that it took the step to “instill the correct view of history in students.” 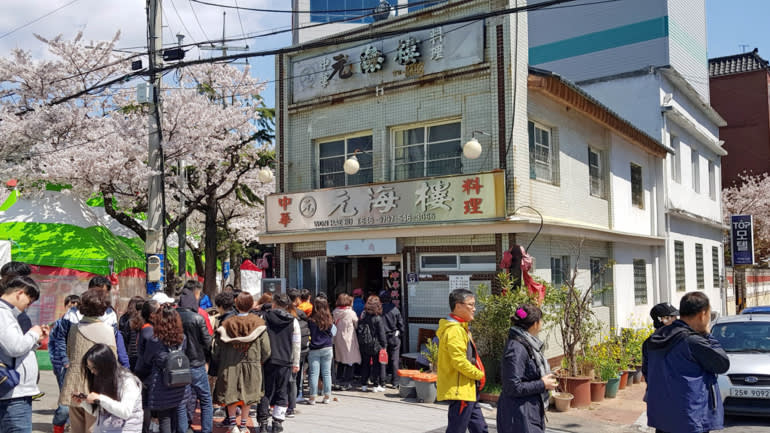 Prewar Japanese buildings are still in use in Jinhae, along the country’s southern coast. (Photo by Sotaro Suzuki)

But those who want to uproot the colonial-era landscape have not prevailed entirely.

In Jinhae, a district in the city of Changwon, cherry trees planted by Japanese during the colonial era were once cut down, but new trees were later planted in the same spot. Jinhae now boasts 360,000 cherry trees and attracts many visitors as South Korea’s best cherry-blossom viewing spot. Prewar Japanese houses in Jinhae still serve as cafes and restaurants.