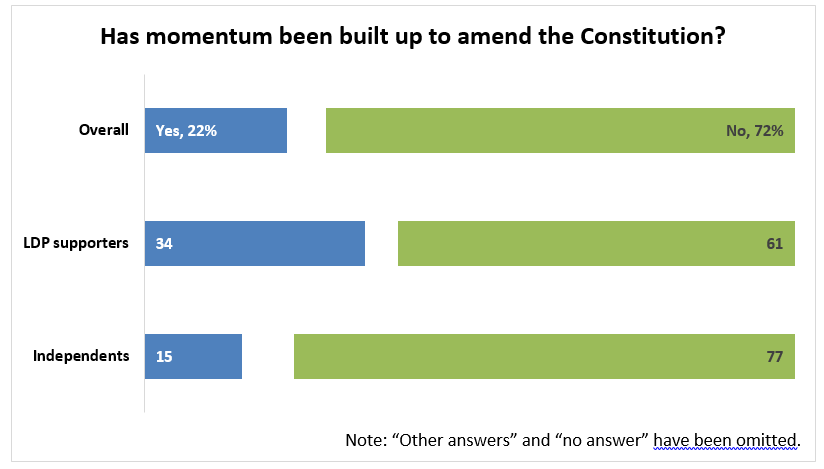 Ahead of Constitution Day on May 3, a large majority of respondents to an Asahi Shimbun survey said they feel no momentum has developed for amending the nation’s Constitution, despite the efforts of Prime Minister Shinzo Abe.

When asked to what extent momentum had built up for amending the Constitution, a combined 72 percent said either “only somewhat” or “not at all.”

While Abe said on Constitution Day in 2017 that he wanted to see a revised Constitution enforced in 2020, the voting public does not feel there is such a need.

Even among respondents who said they supported the ruling Liberal Democratic Party, 61 percent said momentum had not developed for amending the Constitution. Among those who said they had no party affiliation, 77 percent gave the same response.

Questionnaires were mailed out to voters from early March until mid-April.

Similar surveys have been held every year to gauge public opinion on the Constitution ahead of Constitution Day, a national holiday. Valid responses to this year’s survey were received from 2,043 voters.

Abe has proposed that Article 9 be rewritten to clearly state the existence of the Self-Defense Forces.

Abe had explained that his reasoning for writing in the SDF to the Constitution was to end debate over the constitutionality of the SDF as well as to allow SDF members to carry out their duties with pride.

In March 2018, the LDP compiled three other proposals for constitutional amendments. One would establish a new article to allow for emergency Cabinet orders to deal with natural disasters, while another would guarantee educational opportunities regardless of economic background.

The last proposal would guarantee that even the least populated prefecture would have at least one seat up for election in the Upper House vote held every three years.

Respondents were asked about the three proposals, and a majority in each case agreed that those issues could be dealt with without amending the Constitution. Only about 30 percent in each proposal said there was a need for an amendment.

When asked if parties were fulfilling their role of reflecting the voice of the public, 71 percent of respondents said “no,” while only 21 percent said “yes.”

Forty-seven percent of respondents said they had no party affiliation.

When asked to choose from among four options their reason for being unaffiliated, the most popular choice selected by 51 percent of respondents was “there is no political party I can place my hopes on.”

The figure was much greater than the second most popular choice of “I want to decide which party to support at each election,” which was selected by 22 percent of respondents.

Voters were also found to be apathetic about political participation.

When asked how they expressed their opinions on the political sector, 80 percent said they “voted,” while 23 percent responded that they participated in petition drives. Sixteen percent said they made Internet posts or wrote letters to the editor at newspapers.