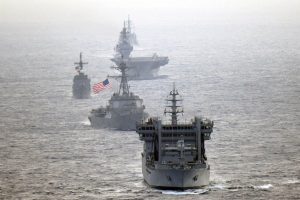 Sankei front-paged a report from Washington saying that the U.S. Navy’s 7th Fleet announced on Wednesday that the USS William P. Lawrence sailed through the South China Sea with warships of Japan, India, and the Philippines, and carried out joint exercises from May 2 through 8. The paper wrote that this was the first time for the four nations to train together in the South China Sea, speculating the exercises were conducted in response to China’s moves to militarize the region and were intended to demonstrate the U.S. military’s strong coordination with its partners in the Indo-Pacific. The paper added that MSDF helicopter carrier Izumo and destroyer Murasame participated in the training. MSDF Rear Adm. Hiroshi Egawa said in a statement released by the 7th Fleet: “The opportunity of a multi-sail with U.S. Navy and regional partners was a great experience. In addition to building mutual understanding and trust, we could contribute to enhancing peace and stability in the Indo-Pacific region.”