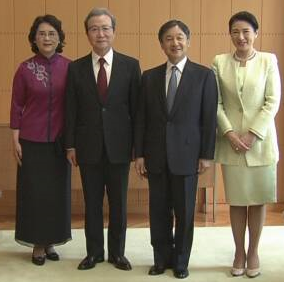 The Imperial couple expressed appreciation for the envoy’s efforts to develop relations between the two countries.

The ambassador and his wife visited the new Emperor’s Akasaka residence in central Tokyo on Thursday.

Cheng will return to China later this month after serving in the post for nine years. He is the longest-serving Chinese ambassador to Japan.

The Emperor and Empress smiled as they shook hands with Cheng and his wife. They reportedly talked with them for nearly 30 minutes in Japanese, without an interpreter.

Emperor Naruhito took over the official duty of meeting new and departing ambassadors from his father, Emperor Emeritus Akihito.

The meeting with Cheng was the first such occasion for the Emperor since he ascended the throne on May 1.