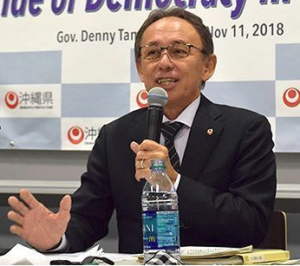 Okinawa Governor Denny Tamaki is finalizing the itinerary of his visit to the U.S. The visit is aimed at calling for the cancellation of relocation of the U.S. Marine Corps Station Futenma to the Henoko district in Nago City. Over 70% of voters opposed the land reclamation off the Henoko district in the latest prefectural referendum. As the number exceeded one-fourth of all eligible voters, the governor is required to notify Prime Minister Shinzo Abe and U.S. President Donald Trump of the result in accordance with provisions of the prefectural referendum ordinance. He intends to meet with senior U.S. government officials to directly convey the will of Okinawa citizens. In order to have the governor’s voice heard by the U.S. government and the public, English is essential in delivering his message. However, as the governor did not take a well-qualified interpreter with him on his past visit to the U.S., some officials voice  concern about whether his message can be well communicated.

It is called into question whether the Okinawa prefectural government under the leadership of Governor Tamaki can make arrangements to convey Okinawa’s voice to the international community.

As Okinawa governor, Tamaki made his diplomatic debut in the U.S. in November 2018 about a month after taking office. He met with U.S. government officials and lawmakers and delivered a lecture at New York University on the issue of building a new base at Henoko. The lecture was aimed at obstructing the building of a new base at Henoko. It included information on recent findings such as the soft seabed and an active fault in the scheduled construction site, as well as the government’s failure to replant seaweed as feed for coral and Okinawa dugongs. He clearly presented individual points at issue. The governor responded to questions but his interpreter’s mistranslations were conspicuous.

For example, Governor Tamaki said, “The national government has not made clear the whole picture of the current project,” but the interpreter did not translate this remark. The governor also said, “I can point out that the Defense Ministry’s plan itself is wrong, but there are no means to stop it.” The interpreter mistranslated the remark as saying, “There are no ways to investigate how the government protects valuable animals.”

When the governor said, “Many experts and organizations have pointed out various issues concerning protecting the environment including dugongs,” the interpreter translated the word “okuno” (“many”) as “some.”

The governor also said: “There is soft ground in the seabed and to make matters worse, a fault line runs beneath the soft ground. Such problems have been revealed.” The interpreter translated the remark as “Okinawa Prefecture has lots of problems,” leaving the impression that the problems are on the Okinawa side. In these ways the interpreter omitted and mistranslated some of the governor’s remarks.

The Okinawa prefectural government wants to obstruct the building of a new base at Henoko. However, the Japanese government is forcibly pushing ahead with the project, ignoring its own faulty procedures and the will of Okinawans. The U.S. government, despite being a party directly involved in the matter, acts like a spectator saying, “It is Japan’s domestic affair.” Visiting the U.S. is an ideal opportunity for the Okinawa government to directly appeal to Washington and the Congress on the Japanese government’s high-handed stance and the U.S. government’s irresponsible manner. It is also a good chance to make Okinawa’s problems known to the international community.

After the governor delivered a lecture during his previous visit to the U.S., a member of the audience said, “In order to convey the governor’s remarkable lecture to the audience and accurately translate questions and answers, he needs a good interpreter who understands well Okinawa affairs and has a command of English close to a native speaker’s.” The prefectural government is required to improve the whole arrangement for the governor’s visit to the U.S. This includes preparations by the Okinawa Prefectural Government Washington D.C. Office, support for an on-site think tank outsourced by the Okinawa government, and finding a well-qualified interpreter.