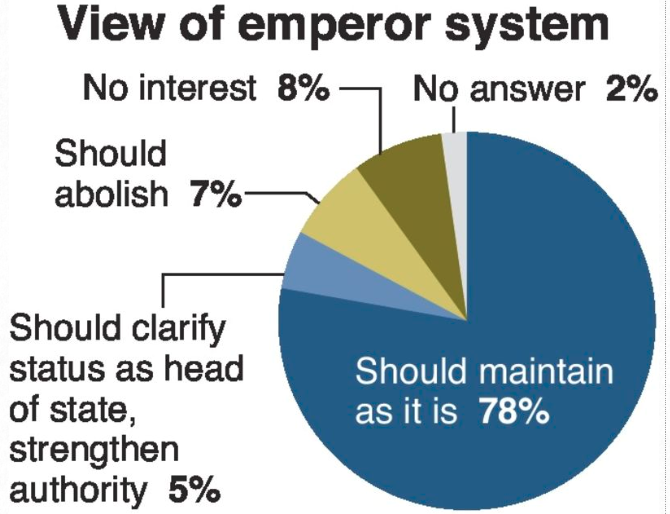 A recent Yomiuri Shimbun nationwide survey showed 78 percent of the respondents said Japan should maintain the system in which an emperor is recognized as the symbol of the state as it is now, while 7 percent said such a system should be abolished.

The recent survey was conducted between March 12 and April 18 by mail before the change of the era from Heisei to Reiwa.

Yomiuri surveys on the Constitution started in December 1989, in the first year of the Heisei era. (They were was conducted by interview back then.) At that time, 73 percent said that Japan should maintain the system. Differences between past and present survey methods make direct comparisons difficult, but support for the symbolic emperor system can be said to have remained at a high level.

The recent survey also showed that 65 percent said all political parties should actively participate in debate on the Constitution, and 73 percent said the commissions on the Constitution in both chambers of the Diet should proceed with debate on that matter without being influenced by the conditions of Diet deliberations on such matters as budget plans and other legislative bills.

As for the Liberal Democratic Party’s plan to revise Article 9 of the Constitution to add legal grounds for the existence of the Self-Defense Forces, 47 percent supported the revision, while 46 percent did not.

More than half of the respondents, or 57 percent, said they would use policies toward the Constitution as a criterion for choosing the political parties they will vote for in the House of Councillors election this summer.

A questionnaire was mailed to 3,000 randomly selected eligible voters nationwide, with 2,103 people, or 70 percent, responding with valid answers.