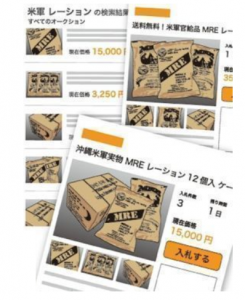 Images of rations displayed on an Internet auction site

Many items from U.S. military bases sold through illegal channels or resold on Internet auction sites are from Okinawa. They are mostly U.S. military emergency rations. Ryukyu Shimpo confirmed they are being sold for more than 10,000 yen per box on an auction site. When reselling duty-free goods from U.S. forces bases in Japan, both seller and buyer are required to possess a customs declaration. This applies to U. S. military emergency rations as well. It is suspected that these goods displayed on Internet auction sites might have been illegally resold or black-marketed without customs declarations.

When Ryukyu Shimpo searched “ration” on Internet auction sites, it confirmed that about 70 items were displayed as of May 8. Of the 70 items, about 50 are to be shipped from “Okinawa Prefecture.” Those goods are marked as “real U.S. military goods” or “rare.” They are sold by the box or bag.

According to the special law on the Customs Act based on the Status of Forces Agreement, when handing over a duty-free item from a U.S. military base in Japan, the parties involved in the transaction are required in advance to report to Customs and clear a Customs inspection for approval. Receiving a duty-free item is regarded as an “import” and the receiver must pay duty and consumption tax to customs.

It has been pointed out that duty-free items from U.S. military bases in Japan are sold through illegal channels or illegally resold on the Internet. A Cabinet’s written answer issued in 2018 notes that handing over and receiving duty-free goods through the Internet requires a customs declaration in accordance with the special law.

Since 2011, Okinawa Regional Customs has disclosed a total of only two cases of black-marketing and the illegal resale of duty-free items from U.S. military bases. This is probably because in the case of sales between individuals on the Internet, it is difficult to determine whether or not the goods were obtained from a U.S. military base.