Suga makes no gaffes but scores no triumphs in diplomatic debut

Chief Cabinet Secretary Yoshihide Suga concluded his first foray into the diplomatic arena with a visit to the United States to meet with top U.S. officials, which produced more interpersonal connections than tangible results. 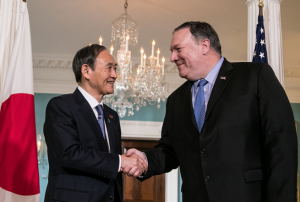 The visit, marking the first to the United States by any chief Cabinet secretary in 30 years, introduced Suga, 70, on the diplomatic stage at a time he is being mentioned as a potential successor to Prime Minister Shinzo Abe.

Although Suga navigated his four-day trip without a mishap, his talks with U.S. leaders concluded with nothing more than a reaffirmation of what Tokyo and Washington have already agreed to on key issues.

Still, after concluding his itinerary, Suga described his trip as “very meaningful” when he summed it up in New York on the night of May 10.

“I could reaffirm cooperation between the two countries toward the early resolution of the issue of the abduction of Japanese citizens by North Korea and the steady progress in realignment of the U.S. military in Japan,” he told reporters.

Although Suga is the most senior government spokesman, his name was not on the radar in U.S. political circles.

Officials in the White House did not initially pay much attention to his plans to visit.

But the Japanese Foreign Ministry and the Japanese Embassy worked hard by making repeated requests to the U.S. government so that Suga could meet with top-ranking officials and put his trip more into the spotlight.

Suga’s trip was made in the capacity as a state minister in charge of the abduction issue, which he also does double duty over.

It was rare for the chief Cabinet secretary to be out of Japan as the post requires him to assume crisis management responsibilities for the administration.

Suga became the first chief Cabinet secretary to travel to the United States since 1989.

Despite its initial indifference, the White House changed its stance and rolled out the red carpet for him.

He met with Patrick Shanahan, acting secretary of defense, on May 9. That day, President Donald Trump announced that he will nominate Shanahan for defense secretary to replace James Mattis, who resigned in December.

Secretary of State Mike Pompeo went to great lengths to meet with Suga despite his tight schedule. Pompeo was originally supposed to be in Europe at the time, but he returned to Washington to take care of some urgent issues. He made himself available for Suga.

On May 10, Suga held talks with Vice President Mike Pence in the White House, a highlight of his visit.

“Whether Suga could meet with Pence was the most crucial point of his trip because Pence is regarded as the next president after Trump,” said a Japanese government official who accompanied Suga.

A U.S. official said the U.S. government took a cue from the high-level requests made by the Japanese side that Suga is a potential successor of Abe.

The official added that several months ago, no one was citing Suga as a potential prime minister candidate.

In fact, the Japanese government prepared for Suga’s visit by placing the same importance as it usually does for the prime minister’s visit, according to a government official.

Among Suga’s entourage were Hiroto Izumi, who is the special adviser to the prime minister; the director-general of the North American Affairs Bureau of the Foreign Ministry; the director-general of the Asian and Oceanian Affairs Bureau of the Foreign Ministry; and the vice minister of defense for international affairs of the Defense Ministry.

But Suga’s discussions with top U.S. officials did not go beyond the reaffirmation of policy lines set by Tokyo and Washington. These include cooperation between the two countries to bring an early resolution to the abduction issue and proceeding with the realignment of the U.S. military in Japan by relocating the Futenma air station in Ginowan to a base under construction off Nago, both in Okinawa Prefecture.

North Korea launched short-range projectiles on May 4 and ballistic missiles on May 9, right before Suga’s trip, but there was no in-depth discussion on the issue between Suga and U.S. officials.

Each of his meetings concluded within the allotted time frame.

Suga’s trip came as many in the ruling Liberal Democratic Party were speculating that he was visiting to make personal connections with U.S. leaders as part of efforts to become the next prime minister.

It also helped put Suga on the map as a potential prime minister because he played the highly visible role of announcing the new imperial era name of Reiwa on April 1.

Some U.S. officials viewed Suga’s visit as an audition to see if he could navigate flawlessly, given that gaffe-prone Deputy Prime Minister Taro Aso is not believed to be on good terms with Pence.

Suga wrapped up his visit without losing any points.

But his trip was a far cry from making a strong impact as a successor to Abe in Washington.

“It was important for us to get U.S. officials to fully recognize the presence of Suga, rather than generate tangible results,” said a Japanese government official.

(This article was written by Natsuki Okamura in New York and Shigeki Tosa in Washington.)