U.S. rolls out red carpet for CCS Suga on his “diplomatic debut” 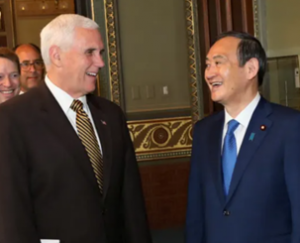 On Sunday all national dailies filed roundups of Chief Cabinet Secretary Suga’s visit to the U.S., which was highlighted by meetings with Acting Defense Secretary Shanahan, Secretary of State Pompeo, and Vice President Pence. The papers observed that in what they referred to as his “no-risk courtesy call diplomacy,” Suga limited himself to seeking U.S. cooperation in dealing with North Korea and support for an early solution to the abduction issue and confirming the Henoko relocation plan, without achieving any notable results.

Asahi said that the Japanese Foreign Ministry’s arranging meetings for Suga with high-level officials even though he was practically unknown to the White House showed that he is emerging as a possible candidate for the next prime minister, according to an unnamed U.S. government official. Furthermore, the members of his entourage, including his interpreter, were practically the same as those who accompany Prime Minister Abe. A source traveling with Suga expressed the opinion that a crucial point of his trip was whether he would be able to meet with Vice President Pence, “who is regarded as the next U.S. president after President Trump.” A Japanese government official was quoted as commenting that “the point was not what results he could produce but whether he would be able to make his presence felt in the U.S. government.”