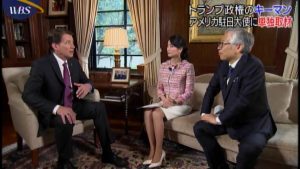 During a report on the U.S.-Japan trade talks on Friday evening, TV Tokyo’s World Business Satellite program aired an exclusive interview with Ambassador Hagerty held at his residence. The program noted that President Trump said during his summit meeting with Prime Minister Abe on April 26 that the two countries might sign a trade agreement when he visits Japan later this month, and this has been perceived in Japan as part of the President’s tough negotiating strategy. However, the Ambassador was shown telling his two interviewers that the President is actually being more patient than he had expected. When asked when he expects the two countries to reach a basic trade agreement, the Ambassador said “yesterday.” He explained that the U.S.’s goal is to reach an agreement “as soon as is practically possible” because since the two countries started their trade talks, Japan has signed multilateral trade agreements such as the TPP and the Japan-EU EPA and these have put American farmers at a relative disadvantage. The Ambassador said that correcting this situation is an urgent matter in order to enable American businesses and farmers to compete at parity or under better terms than other countries.

The Ambassador also suggested that rather than the U.S. raise tariffs or impose restrictions on Japanese autos a better solution would be for Japanese automakers to invest in the U.S. and increase local production. He confirmed that as long as the two countries continue to negotiate “in good faith,” no additional tariffs will be imposed on Japanese auto exports, but said that the U.S. does not want to see a worsening of its trade deficit with Japan while the trade talks are still going on.

Following the interview, the program’s commentator Takita explained that the U.S.-Japan trade talks are very different from the U.S.-China talks in that the latter are a battle for hegemony while based on his conversation with the Ambassador, the former are the “reconfirmation” of a situation where the bilateral relationship has never been better. He said he got the feeling that a lot of progress has been made in bilateral coordination at all levels, so he is optimistic about the outlook for the trade talks. Takita also stated that he got the strong impression that the Ambassador is very supportive of a Japan-DPRK summit to discuss the abduction and other issues.