On Saturday NHK, Kyodo, and Jiji, and on Sunday Mainichi highlighted Agriculture Secretary Perdue’s comments on trade with Japan. According to NHK, Secretary Perdue said that Japan should increase its imports of U.S. farm products in the ongoing bilateral trade talks in order to reduce the U.S.’s huge trade deficit. He said that U.S. consumers are good customers for Japanese products and play a role in enriching the Japanese economy, so the U.S. is also asking for “proper treatment” from Japan. He indicated that in light of the close economic and security relations between the two countries, he hopes for a deal in the trade talks. Kyodo quoted the secretary as saying that the good personal relationship between President Trump and Prime Minister Abe will help achieve economic outcomes that are “mutually beneficial.” 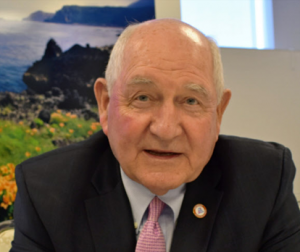 Monday’s Nikkei also published an interview with Secretary Perdue, in which he reportedly voiced hope for a swift agricultural trade agreement with Japan. The USDA chief also commented on the trade friction between the U.S. and China, reportedly explaining that the Trump administration is considering announcing a plan in the near future for the U.S. government to purchase additional products from American farmers in the event that China hikes duties on U.S. food items in retaliation for the latest imposition of high tariffs on Chinese imports. The Secretary underscored that Washington is committed to minimizing the losses to be borne by American farmers as a result of the escalated trade conflict with Beijing.