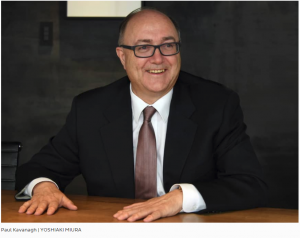 While Japan and Ireland may view each other as fierce rivals at the Rugby World Cup when they face off in Shizuoka Prefecture in September, Ireland sees the sporting event and the 2020 Tokyo Olympics as opportunities to expand contacts — a prelude to further efforts to strengthen bilateral ties that are expected to grow in importance if the U.K. leaves the European Union.

Ireland is pinning its hopes of strengthening the bilateral relationship on a chance to offer Japan a stable and secure platform for trade and investment within the EU, Paul Kavanagh, Ireland’s ambassador to Japan, said Friday.

“We see opportunity post-Brexit for Irish relations with Japan,” Kavanagh said during a courtesy visit to The Japan Times’ head office.

The ambassador said Brexit is undermining certainty, potential and stability in relations with other EU members and regions while Ireland’s membership has helped it become “more open, more international, more global, less isolated.”

He believes Ireland can serve as a platform to trade freely within the single market, he said.

“We present to Japan an attractive partner for trade and investment and research and study,” he said.

Should Brexit happen, Ireland will be the only primarily English-language country in the union, which would create educational and business opportunities for Japan, he added.

Kavanagh said Ireland is investing some $25 million in developing a state of the art “Ireland house” in Tokyo, both as a platform to strengthen the cultural ties and to promote projects in other sectors. He added that Ireland is planning to establish a direct flight connecting the two countries.

He believes Ireland has strong potential to attract investment from Japan in fields such as technology, health care services, clinical trials and financial services.

In 2017 the two countries celebrated 60 years of diplomatic relations.

Kavanagh, who in the 1990s served as director of the United Nations Information Center in Tokyo and returned last year after his assignments as ambassador to France, China, the United Arab Emirates and the Persian Gulf, said he observed the Imperial succession with interest.

Ireland’s president has sent letters to both Emperor Emeritus Akihito and Emperor Naruhito, asking the latter to visit.

One of the highest-profile visits between Ireland and Japan occurred in 1985, when the emperor emeritus and his wife, who were then crown prince and crown princess, visited Ireland. They returned for a four-day visit in 2005.