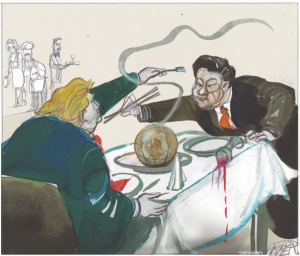 Last week in this column I wrote: “As long as Washington and Beijing misread each other, Trump’s personal ‘art of the deal’ will not work against a country like China with 3,000 years of human history.” No wonder the trade negotiations stalled on Friday without making any deal, reducing prospects for a breakthrough.

The mainstream media in Tokyo seem to be ambivalent. The editorials of the six major daily newspapers available in my neighborhood are divided. As the summaries below show, some of the editorials criticize the United States’s aggressive negotiating style but ask both countries to resume talks, while others urge China to make progress in structural reform.

Tokyo Shimbun: Twenty-five Percent Tariffs Imposed, We Hope a Dialogue Takes Place at the Summit Level. Ramifications for the Japanese economy are possible and, if the aggressive American negotiating style is allowed, the next targets will be the European Union and Japan.

Asahi: The U.S. and China Must Continue Their Trade Talks Patiently. While the EU and Japan consider U.S. demands to be reasonable, American actions cannot be justified if they ignore international trade rules.

Mainichi: More U.S. Tariffs on China, Serious Situation Beyond Commerce and Trade. While China needs to reform itself, if Americans try to pressure and force China to change, it will significantly destabilize the international order.

Nikkei: The U.S. and China Should Continue Dialogue to Solve the Trade War. While its claims are legitimate, the U.S. must correct Chinese behavior through negotiations while refraining from high tariffs that are incompatible with international rules.

Yomiuri: U.S.-China Trade Frictions: Stop the Quagmire Through Consultations. Tokyo must also closely observe the negotiations because the U.S. might strongly demand that Japan make concessions by threatening to impose sanctions in the Japan-U.S. negotiations.

Sankei: We Should Consistently Urge China to Implement Structural Reform. While dialogues are important, without hastily trying to reduce short-term trade deficits we must press China hard to work on structural reform.

Do we really know what happened in the trade talks last week? The news media reported that there are two different narratives. The U.S. narrative reflected U.S. President Donald Trump’s negotiating tactics of “making a deal from a position of strength,” while the Chinese version assumed that the supreme leader of China would never give in to a foreign threat.

Let’s start with the U.S. version: Shortly before the talks started, the negotiations were in their final laps. China, however, rejected American demands that it change laws constraining American businesses, pulled back from its commitments and attempted to renegotiate the trade deal.

The Chinese version is completely the opposite: There had not been a breakdown in talks and China had not reneged on the deal. The two sides are still in the process of exchanging draft agreements and before an agreement is reached, any change is natural. Thus, China did not backtrack but just had disagreements over how to write some of the text. It was just a small setback and the negotiations would continue but China wanted a deal premised on equality and dignity, and the remaining differences were matters of principle over which China could not make concessions.

Alright, folks! Which side is telling the truth? I would say neither of them. The following is my take on what happened last week, based on my experience in negotiating trade deals with my U.S. counterparts for two years in my capacity as chief negotiator on trade in services at the World Trade Organization between 1994 and 1996.

Although I have no classified information now about the so-called U.S.-China draft agreement, I can easily imagine what was happening behind the scenes. According to a Reuters report from Washington and Beijing, the document was a nearly 150-page draft trade agreement with seven chapters.

The Reuters report stated that in each of the seven chapters, “China had deleted its commitments to change laws over issues including theft of U.S. intellectual property and trade secrets; forced technology transfers; competition policy; access to financial services; and currency manipulation.” I do not consider the report to be accurate or neutral. If I had negotiated a trade deal, especially one written up in a 150-page document, I would never call it a “draft agreement” because the final agreement would be a package deal and if you have 150 pages with seven chapters you can easily have dozens of “two suggestions in brackets” removed if agreed upon by the two sides.

If so, the U.S. narrative is misleading. The negotiations were hardly in their final laps. China might have just rejected the American suggestions that it “change laws constraining American businesses.” Thus, China might neither have “pulled back” nor “reneged.” It just attempted to continue to negotiate the trade deal.

By the same token, the Chinese version is not accurate, either. China could have been willing to change relevant laws and regulations as long as the amendments were not viewed by political enemies or ordinary people as a defeat or as “losing face” because Washington has forced a top Chinese leader to accept the deal against his will.

China, in a nutshell, might have hinted to the U.S. negotiators that Beijing would, quietly or coincidentally amend those laws if they were not clearly specified in the agreement. Americans, however, naturally demanded to publicize the document. That would not be a deal with dignity for the Chinese and could undermine matters of principle.

Regardless of which side is telling the truth, the bilateral negotiations will not easily be concluded to their satisfaction. They will only sporadically produce limited, tentative or superficial compromise deals. As I stated previously, the U.S.-China “Star Wars” series will continue for a decade or two and a new episode has just begun.

The longer the showdown between the world’s two biggest economies persists, the more divided into two digital economic blocs — Chinese and American — the global economy will become. Whether we like it or not, we may have to eventually decide to which block we belong.

Kuni Miyake is president of the Foreign Policy Institute and research director at Canon Institute for Global Studies.