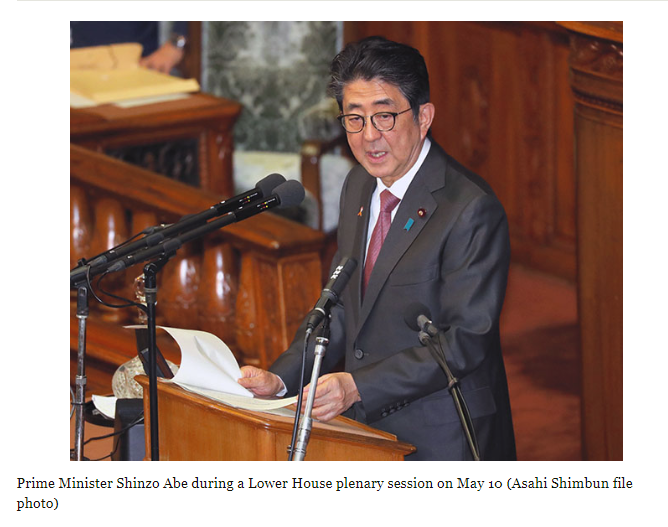 The government is responsible for stating its stance clearly to audiences both at home and abroad on Japan’s goals and orientations, all the more because world affairs are so uncertain.

Prime Minister Shinzo Abe has said he will seek, with no conditions attached, a summit with Kim Jong Un, the North Korean leader.

Abe had previously said he would agree to hold talks with the chairman of the ruling Workers’ Party of Korea only if there was progress made on the issue of Japanese citizens abducted by North Korea in the 1970s and 1980s.

He now says he is ready to meet Kim unconditionally, which amounts to a major change.

Abe, however, has provided no persuasive explanation on the rationale behind that policy shift, his strategies or his outlooks for the future.

Asked about his real intentions during Diet debate, Abe said he had come to state his determination for a summit with Kim in a “clearer format.”

He also said there is no change in his stance to seek a comprehensive settlement of the issues of the abductees and of North Korea’s nuclear and missile development and to pursue diplomatic normalization on the basis of the bilateral Pyongyang Declaration of 2002.

Perhaps Abe wants to say that everything remains the same as before. But by no means for the first time has he been seen reversing his stance without a thoughtful explanation.

It is all too natural that dialogue is a requisite for making a breakthrough in Japan-North Korea relations.

That notwithstanding, Abe himself had insisted on a hard-line stance, which was all about pressure, and maintained there was no sense in having “dialogue for the sake of dialogue.”

During an address he gave at a U.N. General Assembly in 2017, Abe used the word “failure” to describe dialogue with Pyongyang and said, “What is needed … is not dialogue, but pressure.”

Despite all that, Abe did an about-face when U.S. President Donald Trump decided to hold a first U.S.-North Korea summit. He praised Trump for his “courage” and began seeking a path of dialogue.

In addition, a passage saying that Japan was working to “maximize pressure on North Korea,” which appeared in the 2018 edition of Japan’s Diplomatic Bluebook, has been dropped from the 2019 edition, which was released last month by the Foreign Ministry. That is all too inconsistent, even admitting there is a need for flexibility to cope with changing situations.

In fact, another passage in last year’s Diplomatic Bluebook has also been dropped from the lastest edition: “the Four Northern Islands belong to Japan.”

The reference to isles off the eastern coast of Hokkaido, which were seized by the Soviet Union at the end of World War II and are claimed by Tokyo, had to do with principles of Japan’s standing on the territorial issue.

Despite all that, Foreign Minister Taro Kono has only said, “The Diplomatic Bluebook describes diplomatic affairs of the corresponding year on the basis of overall considerations.”

That could hardly be called a convincing explanation.

Be it in facing North Korea or Russia, there is likely no guarantee that Japan can draw positive reactions from the other side if Tokyo only abstains from offending its counterpart.

It also appears as if Abe has placed too much emphasis on his personal ties with Russian President Vladimir Putin, whose intentions he has apparently misread.

Perhaps Abe is hoping to take action on the diplomatic front to boost public support for his own administration ahead of the Upper House election this summer. That said, a diplomatic approach that lacks careful thought based on cool-headed analysis could only gravitate toward ad hockery and end up allowing Japan to be taken advantage of.

A policy reversal is tricky when it does not come with an explanation.

As long as Abe defines the abduction issue as his top agenda item, he should state clearly how he views the current situation and what direction he hopes to take in the months and years to come.