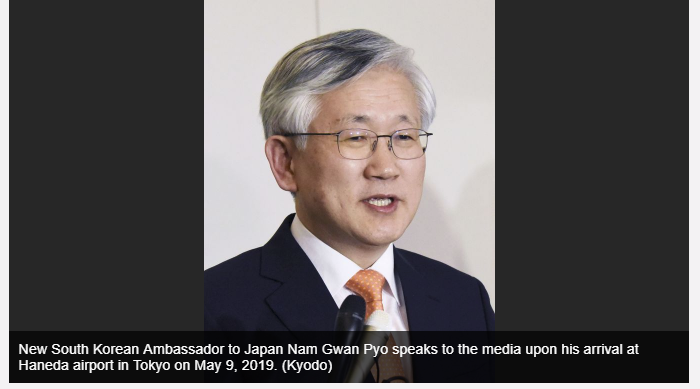 South Korea’s new ambassador to Japan said Monday he hopes to work on a “future-oriented” approach to bilateral relations frayed by differing views on wartime history and maritime tensions.

“I feel a great sense of responsibility assuming this position at a crucial time for ties between our countries,” Nam Gwan Pyo told Japanese Foreign Minister Taro Kono in Tokyo.

“During my tenure as ambassador, I hope to work toward the improvement and future-oriented development of ties,” he said.

Nam, who previously worked at the South Korean Embassy in Tokyo between 1992 and 1995 and served as ambassador to Hungary and Sweden, has taken the job at a time when the neighboring countries are having trouble seeing eye-to-eye on a range of issues.

Among factors deteriorating the bilateral ties is the issue of wartime labor by South Koreans under Japanese colonial rule leading up to and until the end of World War II.

South Korea’s top court has ordered several Japanese companies to compensate the workers for forced labor, decisions Tokyo argues breaches a 1965 accord that settled the issue “finally and completely.”

The two governments have also traded barbs over a South Korean warship’s alleged use of fire-control radar to target a Japanese patrol plane, and Seoul’s accusations of Japanese planes making extremely low passes over its ships.

At the meeting at the Japanese Foreign Ministry, Kono welcomed Nam and said he looks forward to working with him.

“Our peoples are interacting very actively, as evidenced by the more than 10 million people that come and go between our countries annually. Taking their lead, and with your help, I hope that we can resolve the difficult situation between our governments,” he said.