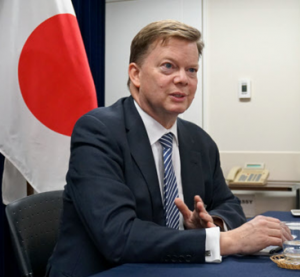 Nikkei reported on an interview with U.S. Embassy Minister Counselor for Commercial Affairs Keith Kirkham in which he highlighted the Embassy’s commitment to assisting business tie-ups between emerging American and Japanese companies in such areas as artificial intelligence, heath care, information technology, and big data. Stressing that America is one of the most attractive places for business investment by Japanese enterprises, Kirkham reportedly said the Embassy is looking into holding more events to brief local businesspeople on the rules and regulations to be taken into account when investing in the U.S. market. The article explained that the Embassy has been holding such sessions since last September following the enactment of the Foreign Investment Risk Review Modernization Act. Kirkham reportedly encouraged Japanese participation in a seminar on startups to be held in the U.S. capital in June.