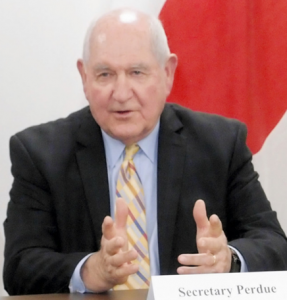 All national papers except Nikkei gave inside-page coverage to remarks made to reporters in Tokyo on Monday by visiting Secretary of Agriculture Perdue, who voiced strong hope for the swift conclusion of a trade agreement with Japan. He reportedly expressed concern about the “unfair treatment” that American farmers have to bear when exporting products to Japan because of the effectuation of the TPP and the Japan-EU EPA. “It’s high time to achieve progress,” said the U.S. official. “President Trump is on good terms with Prime Minister Abe. They may be able to accomplish what the negotiators have not been able to. The President is hoping for a swift settlement.” Speaking on the large bilateral trade imbalance, the secretary reportedly said: “Since we purchase a very high volume of Japanese products, we should be accorded top class treatment.”  According to Yomiuri, the Secretary also said he is “fully aware” of and “giving consideration” to the fact that there will be an Upper House election in Japan in July.

The top USDA official also commented on the trade conflict between the U.S. and China by saying: “American farmers are disappointed by the breakdown of the trade talks. If the Chinese retaliate or backtrack on their previous commitments, President Trump will respond appropriately to avoid putting U.S. farmers in a disadvantageous position.”