USAF plans to construct drone parking aprons at Yokota base 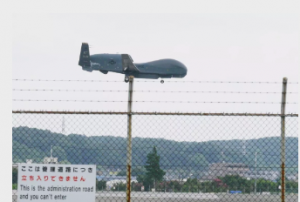 Global Hawk landing at the Yokota base

The U.S. Air Force plans to construct aircraft parking aprons at the Yokota base (straddling six municipalities in Tokyo’s Tama district including Fussa City) for the unmanned aerial vehicle (UAV) RQ-4 Global Hawk stationed in Guam, Akahata Shimbun learned on May 11. Every year from May to October since 2017, five Global Hawks have deployed to the Yokota base from Guam to avoid the typhoon season. It is possible that the USAF is attempting to make the Yokota base a new reconnaissance base for the conduct of surveillance over the Chinese mainland, the Korean Peninsula, and the South China Sea.

On April 29, the base’s 374 Contracting Squadron released contract documents that requested permission to use a certain contractor as an emergency exception to the equal business opportunity requirement for the construction of anchoring points for the Global Hawk. The documents requested approval for concluding a contract with a pavement company in Minato Ward. Akahata learned that the request remained unapproved as of April 5, but the squadron eventually concluded a contract with the company on April 19.

The base plans to install eight anchoring points and five fixed base points [for the UAV] at four aircraft parking aprons south of facilities exclusively used for special operations aircraft CV-22 Ospreys. The base also plans to install a system for fastening a Global Hawk while its engine is running.

In the released documents, the contracting squadron explains its request for an emergency exception to the equal business opportunity requirement as follows: (1) there is no existing space to house the UAV at the base maintenance and refueling site; (2) the base requests provision of temporary housing space for the UAV’s return to the base; and (3) the current deployment schedule for the Global Hawk cannot be changed.