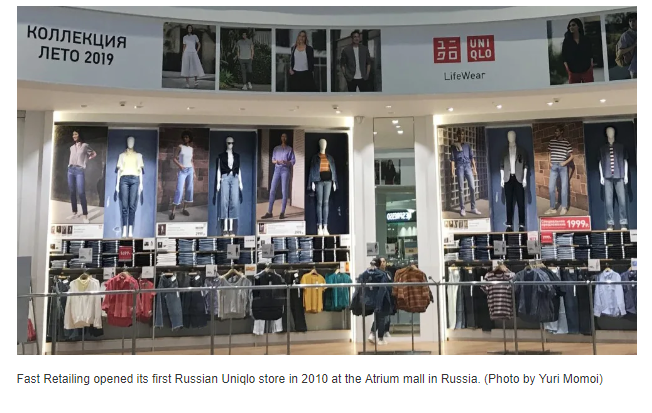 MOSCOW — Russia is perceived in Japan as a tough market, with talk about doing business here tending to run along political lines: joint economic activities in the disputed southernmost Kuril Islands or Tokyo’s eight-point cooperation plan, for example.

But as the Russian economy recovers, Japanese companies are setting politics aside to enter or expand in a country that is becoming a key European market.

The Atrium mall in Moscow is home to Fast Retailing’s first Russian Uniqlo location. It is said to have seen lines for days on end when it opened in 2010. But the crowds have abated now that more stores have opened in the country. Russia already has the most Uniqlos in Europe, with a location opening Friday bringing the count to 35.

The casualwear chain even has multiple outposts in such less-prominent cities as Yekaterinburg, Nizhny Novgorod, Kazan and Rostov-na-donu, each with a population exceeding 1 million.

“Russian consumers are sensitive to fashion trends,” said a representative at Fast Retailing’s Russian arm. “Even now, we’ve gotten requests from all over to open new stores — there’s a lot of room for growth.”

The Russian economy peaked in 2013 before being battered by a plunge in oil prices as well as sanctions imposed in response to the 2014 annexation of Crimea.

But now it is “on a recovery track, and money is starting to flow back into the country,” said Takafumi Nakai, director of the research division at the Japan-based Institute for Russian & NIS Economic Studies.

The improving economic outlook is piquing Japanese companies’ interest, as is the fact that Russia is starting to realize its potential as a consumer market.

Part of its appeal lies in the cities that have underpinned Uniqlo’s expansion. “Russia has 15 cities with at least 1 million people. Nearly all of them have growing populations,” said Tetsuya Umetsu of the Japan External Trade Organization.

“The idea of [buying] ‘as much as you need of what you need, at a low price’ has taken hold among a wide range of consumers,” Umetsu said, adding that fast-fashion stores, chain restaurants, supermarkets and the like are eager to make inroads in Russia.

Russian consumers have long had an eye for novelty, which helps new and interesting services — like the taxi-hailing service run by local internet giant Yandex — spread like wildfire. 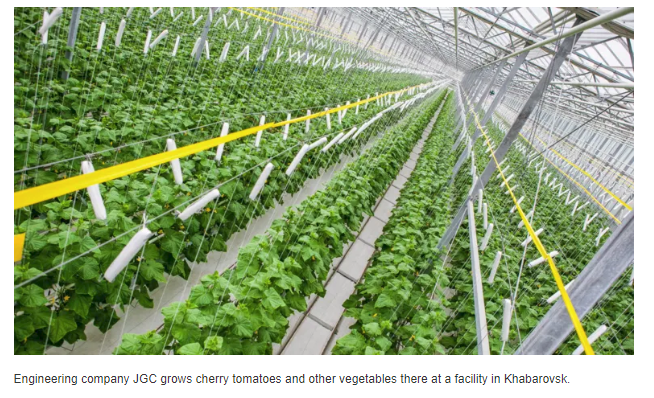 For automakers, Russia has not lost its luster as a market despite the slowdown of recent years. The country accounted for the largest share of Toyota Motor’s European sales volume even when demand was sluggish, and the company hopes to ride the economic recovery to further growth.

Just 1.8 million new cars and light commercial vehicles were sold in Russia last year. Yet Shuji Suga, president of Toyota’s Russian arm, sees the annual figure potentially rising to 3 million. He cites three main reasons: Russia is an oil-producing country with a large economy, it has a population of 144 million, and the number of cars per household remains low.

And because of the market’s penchant for luxury, Toyota’s high-end Lexus brand sells an annual 20,000-plus vehicles in Russia — far more than in Germany or the U.K.

A survey by JETRO last fall of Japanese companies operating in Russia found that 72.8% expected a positive operating profit here for fiscal 2018, the largest share in the six years since the government-backed body began conducting the annual poll.

The market is still attracting new entrants, with Hino Motors breaking ground in April on its first Russian plant outside Moscow and Matsuya Foods opening its first restaurant in the capital.

Activity is also picking up in the Russian Far East, a remote area where President Vladimir Putin has pushed hard for investment.

Engineering company JGC grows cherry tomatoes and other vegetables there at a facility in Khabarovsk. Though the vegetables cost almost half again as much as the imports from China that locals usually buy, they are popular enough that JGC has doubled the plant’s size to 5 hectares and plans another expansion to 10 hectares next year. The company chalks this up to its ability to consistently deliver freshness and safety.

After a January meeting with Japanese Prime Minister Shinzo Abe, Putin said he hopes to expand bilateral trade by at least 50% over the next few years to $30 billion. With imports and exports growing more than 15% last year to about $23 billion, this seems to be a feasible target.