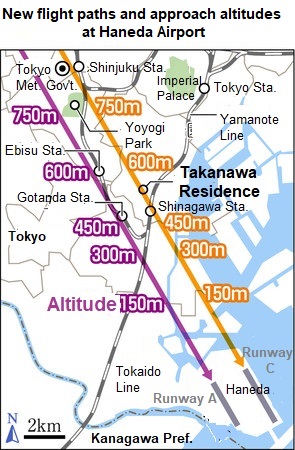 By Tsuyoshi Minagawa and Kenichi Komatsuda

The government plans to start operation of two new flight paths into Haneda Airport in 2020. The Takanawa Residence (Minato Ward, Tokyo), which will serve as the temporary residence of Their Majesties the Emperor Emeritus and Empress Emerita, is almost directly under the flight paths, it has been learned. During the day, about 30 passenger aircraft will pass through that air space every hour at an altitude of about 540 meters. Experts say that the Takanawa Residence and the neighboring residential area “will be subjected to noise levels that obstruct daily conversation.”

The government aims to commence use of the new Haneda flight paths prior to the Tokyo Olympic and Paralympic Games, which will open in July 2020. International flights landing at Haneda Airport will pass through the airspace of central Tokyo between 3:00 p.m. and 7:00 p.m., a time period when southerly winds blow.

According to the explanation given by the Ministry of Land, Infrastructure, Transport and Tourism (MLIT), passenger aircraft taking the new flight paths will pass overhead about 100 meters west of the residence once every two minutes at an altitude of about 540 meters. Jumbo aircraft used for international routes will produce up to 75 decibels of noise, and middle-sized aircraft will emit up to 70 decibels of noise.

Toshihito Matsui, professor of environmental health at Hokkaido University specializing in aircraft noise, comments that this level of noise “is equivalent to about two to five times the noise level of daily conversation. If a window in the room is opened, the noise will interfere with communication. It is far from being an environment conducive to spending quiet, relaxed days.”

To half the amount of sound emitted by an aircraft flying at an altitude of 540 meters requires moving 1.5 kilometers from the area directly under the flight path. Matsui continues: “The couple will experience the same level of noise as those in the homes and public facilities near the Takanawa Residence.”

Instrument Landing System (ILS), a precision runway approach aid based on radio beams that provide pilots with guidance during an approach to land, will be used for the two flight paths to prevent the collision of aircraft landing at the two parallel runways. For this reason, MLIT’s Capital Area Airports Division says, “We cannot change the flight paths no matter what facilities are below them on the ground.”

Top officials at the Imperial Household Agency say, “We understand that the Takanawa Residence is under the new Haneda flight paths. We have communicated this to Their Majesties the Emperor Emeritus and Empress Emerita and gained their understanding.”