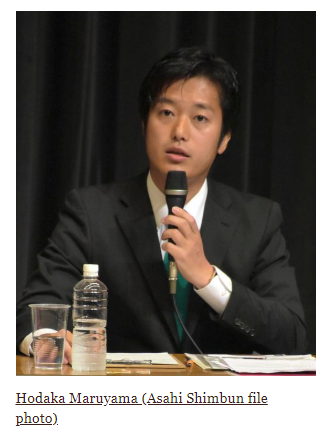 In Japan, a self-proclaimed pacifist nation, any Diet member who appears to justify war as a solution to territorial disputes simply is not qualified for the job and should resign at once.

This is exactly what we demand of Hodaka Maruyama, a Lower House legislator of Nippon Ishin (Japan Innovation Party) who accompanied a group of former residents of the disputed Northern Territories on their recent visa-exempt “homecoming” trip to the island of Kunashiri. Maruyama went as an “adviser” to the group.

At the island’s friendship center on May 11, Maruyama caught the leader of the group off-guard by asking him, “Are you in favor of or opposed to going to war to take back this island?”

The group leader expressed opposition, but Maruyama persisted, practically shouting at him, “Nothing will be accomplished unless we go to war.”

After returning to Tokyo, he retracted and apologized for his remarks, admitting they were “misleading and inappropriate.”

But they were beyond “inappropriate.” In no way should they be dismissed simply as a drunken rant.

Article 9 of the Constitution renounces war as a means to settle international disputes. The very idea of reclaiming the Northern Territories by force of arms flatly conflicts with Japan’s national policy.

The visa-exempt exchange program, which began in 1992, aims to rebuild a relationship of mutual trust between Japan and Russia by enabling former Japanese residents and current Russian residents to get to know one another.

To even mention war as a solution to the territorial dispute–and during a friendship visit, of all things–is nothing short of foolish.

Moreover, Maruyama tried to leave the friendship center in violation of the rules that require visitors to remain inside the center at night.

The exchange program is built on a delicate balance of rules, requiring utmost care to preserve that balance. It was simply unconscionable that Maruyama, who should have been the most conscientious in observing the rules as the group’s adviser, apparently thought nothing of ignoring them.

While Maruyama kept up his drunken rant, the leader of the visiting group–who is pushing 90–repeatedly expressed his anti-war position. This was only to be expected of any man who experienced the pain of being driven out of his homeland by war.

He formed a sharp contrast to 35-year-old Maruyama of the postwar generation.

Maruyama on May 14 tendered his resignation from Nippon Ishin, but the party refused to accept it and expelled him instead.

Party leader and Osaka Mayor Ichiro Matsui denounced Maruyama for “crossing the line as a legislator (with his remarks)” and called for his voluntary resignation from the Diet.

Maruyama got into trouble with the police in late 2015, when he had a dispute with men while drinking and bit a man’s hand.

Severely reprimanded by the party, Maruyama vowed to forswear alcohol as a sitting legislator, but he fell off the wagon after the 2017 Lower House election.

Lacking common sense as a politician and incapable of self-discipline, Maruyama can only be judged unfit to sit in the Diet.

But he has indicated his intention to stay in politics as an independent. If that is the case, we believe the Lower House should move to demand his resignation.