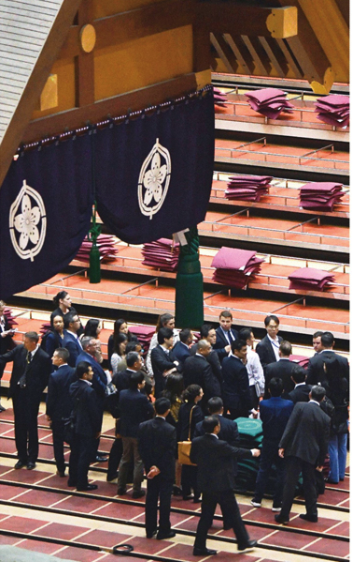 A group believed to be U.S. government officials inspecting the Ryogoku Kokugikan sumo arena with regard to security issues on May 15 ahead of U.S. President Donald Trump’s attendance at matches there. (photo by Kazuya Kamogawa)

The Secret Service (U.S. Secret Service, or SS), which guards the U.S. president, on May 15 inspected the Ryogoku Kokugikan sumo arena in Tokyo’s Sumida Ward ahead of U.S. President Donald Trump and the First Lady’s attendance at the May Grand Sumo Tournament, informed sources told the Sankei Shimbun. President Trump and the First Lady will visit Japan from May 25 to 28 as the first state guests since Japan’s imperial era name changed to Reiwa [on May 1]. In addition to consulting Japanese police authorities to arrange the couple’s seats, the Secret Service is also believed to have clarified security-related issues regarding President Trump’s wish to congratulate the champion in the sumo ring.