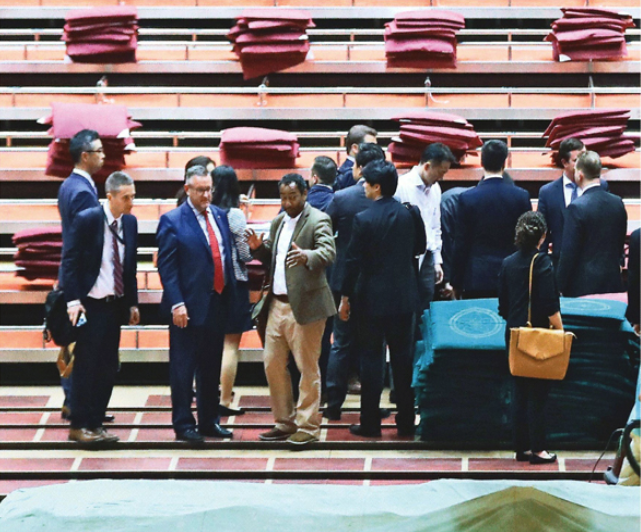 U.S. President Donald Trump will become Japan’s first state guest in the Reiwa Era [when he visits the nation at the end of May]. During his visit, he hopes to watch the May Grand Sumo Tournament. In preparation, the United States Secret Service (SS) apparently made a thorough advance check of the facilities during its inspection tour of the Kokugikan sumo stadium on May 15.

According to multiple sources, after the sumo matches had ended for the day and the spectators had left the venue, the Secret Service inspected the structure of the building as well as its facilities and checked the evacuation routes, while receiving a guided tour by the Nihon Sumo Kyokai. Representatives of Japan’s Foreign Ministry and National Police Agency also participated.

Based on the inspection tour, the Secret Service and the Japanese police authorities will decide on the location of the President’s seat as soon as early next week. Consultations may be held on how to deal with cushions spectators sometimes throw on occasions such as the defeat of a yokozuna grand champion and with the provision of bottled alcoholic beverages as the glass bottles could pose a danger.

On May 26, the last day of the May Grand Sumo Tournament, President Trump will view the final matches with Prime Minister Shinzo Abe. The President has said that he would like to commend the victorious wrestler in person after the matches are over.