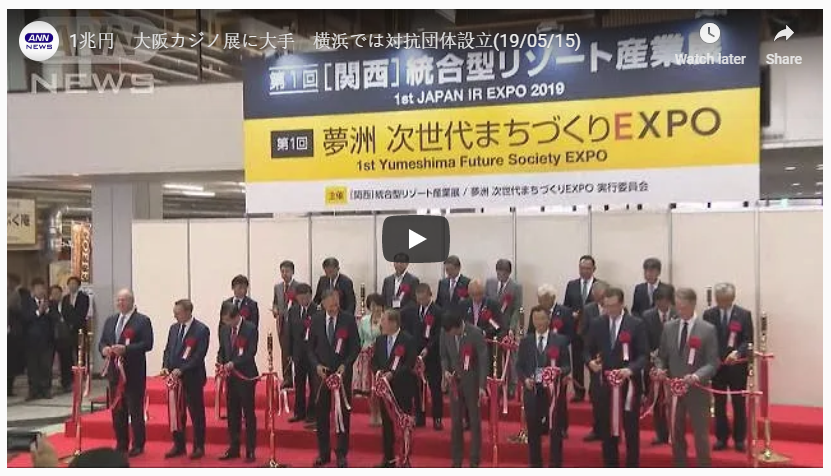 OSAKA – With the cities of Osaka and Wakayama stepping up their efforts to win a legalized integrated casino resort, the Japan IR Expo opened Wednesday in Osaka.

Entertainment and construction companies, banks and dozens of firms from Japan and abroad hoping to become involved with an integrated casino resort were also present.

A number of municipalities have expressed interest in hosting an integrated resort — a term for facilities that combine casinos with shopping malls, convention centers and hotels — and four cities have announced specific plans. Tomakomai in Hokkaido, not far from New Chitose Airport, predicts over 8 million visitors a year would come to an IR facility.

In Sasebo, Nagasaki Prefecture, plans have been drawn up for a casino resort at the Dutch-style theme park Huis Ten Bosch. Nagasaki officials predict 7.4 million visitors a year.

In the Kansai region, both Osaka and Wakayama are aggressively lobbying for a casino. Osaka, widely considered the favorite location for Japan’s first large-scale casino resort, has plans for an IR complex it predicts will draw over 24 million people a year. Wakayama’s IR plan predicts 4 million visitors per year.

The central government will award a maximum of three casino licenses initially. But with public wariness over problem gamblers and other casino-related social ills still strong, when the first licenses will be issued remains unclear.

Osaka wants to have a casino resort up and running by the 2025 World Expo. That will be a tight schedule if the central government doesn’t issue a license within the next couple of years.

MGM Resorts Japan, widely considered to be one of the favored candidates for winning the rights to an Osaka IR, says that opening before 2025 was not out of the question.

“We would like to meet (Osaka’s) expectations. We’ll certainly do everything we can do to be as responsive as possible,” said Jason Hyland, representative officer and president of MGM Resorts Japan.

“The coming of the 2025 World Expo to Osaka, and a casino resort, if it opens up in 2024, offer Osaka great opportunities to attract more conventions and exhibitions,” said Kaneyuki Myohdai, president of event organizer Sakura International Inc., which hopes to be involved with an Osaka integrated casino resort.