Probe finds F-35’s first crash was caused by manufacturing defect, in revelation that could affect Japan plans to buy aircraft 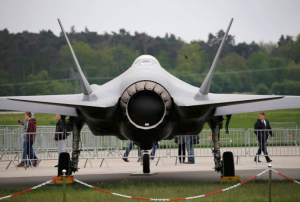 WASHINGTON – The crash of a U.S. Marine Corps F-35B that temporarily grounded the entire fleet of next-generation jets in 2018 was caused by a manufacturing defect in a fuel tube made by a United Technologies subcontractor, according to congressional investigators.

The defect “caused an engine fuel tube to rupture during flight, resulting in a loss of power to the engine,” the Government Accounting Office said last week in a report on major weapons systems that referred to the September crash in South Carolina. The Pentagon told the watchdog that it identified 117 aircraft — about 40 percent of the worldwide F-35 fleet at the time — with the same type of fuel tubes that had to be replaced.

The disclosure was the first official information about the crash since the Pentagon program office in late October issued a status statement while the Marine Corps was still conducting its investigation. United Technologies Corp.’s Pratt & Whitney unit “is fully responsible” for “the propulsion system and has the lead in working” the failure analyses, according to the statement at the time.

A spokeswoman for the Pentagon F-35 program office deferred comment to Pratt & Whitney, whose spokesman, John Thomas, said the company had no comment.

Marine Corps spokesman Capt. Chris Harrison said in a statement that the crash probe is continuing, and that the results will be released once complete. The marines have replaced all of the relevant fuel supply tubes and “we continue to strive each and every day to ensure the safety and readiness of our aircraft,” he added.

The F-35 is the Pentagon’s most expensive weapons program, at a projected cost of more than $428 billion.

The Sept. 28 crash of the F-35B near Beaufort, South Carolina, was the first in the two-decade old program’s often-rocky history of delays, cost increases and technical glitches. Although the pilot safely ejected, the incident prompted concerns about the aircraft, which is being built by and sold to an international consortium of U.S. allies, including the U.K, Italy, Australia and Turkey. Japan currently plans to procure a total of 147 F-35 fighter jets, 105 of which are expected to be F-35A models. The rest will be F-35Bs, which are set to be deployed on two Izumo-class warships that the Defense Ministry plans to convert into multipurpose aircraft carriers.

Last month, a Japanese F-35A crashed off Japan’s coast, with only portions of the jet’s wreckage found since then despite a monthlong search. The cause of the crash is under investigation. The jet’s pilot hasn’t been found. Japan has said that the crash would not affect its procurement plans, and it was unclear if the new revelations would spur any change.

The Pentagon program office said last year that “more than 1,500 suppliers are on the F-35 program and this is an isolated incident which is quickly being addressed and fixed. Safety is our primary goal.”

Aside from the defect, Pratt & Whitney’s recent track record delivering engines on time has been spotty. Deliveries surged to 81 in 2018 from 48 in 2012, according to the GAO — yet 86 percent of those were delivered late, up from 48 percent in late 2017. The delays were due in part to an increase in the “average number of quality issues per engine” — 941 in 2018 against 777 a year earlier, the GAO said.

Pratt & Whitney told the GAO that “its late engine deliveries increased in 2018 partially due to a subcontractor that did not have all of the needed tooling in place to produce more F-35B engines,” according to the report.